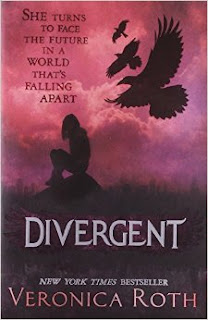 Some said to me recently isn't Divergent just a poor man's hunger games. Well, no, its really not. Yes they are both dystopian future scapes with a female lead but that's kind of the end of it.

I saw the movie first as is typical of me and then I picked up the book. I was pleased to see how much of the book made it into the movie, it was truer to the source material than a lot of movies are but as I love with books, especially this one, there was more detail to it.

I loved the idea of factions based on personality and honest couldn't decide which one I would be in myself, though I'm pretty sure dauntless would be out, not because I'm not brave but because I would never be able to keep up.

There were parts of the story that were a bit slow, mostly Tris's inner monologues but I loved her interaction with Four. There is far more to their love story in the books, it felt a bit sudden to me in the movie. I love the Four on screen but his book version is a little moodier than I like and sometimes that can be off putting when you watch your heroine falling for him.

Over all its a good read and one I will recommend.