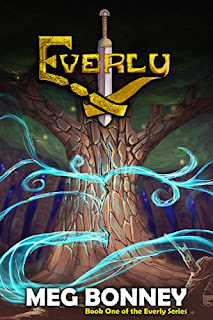 Madison Rosewood on her 18th birthday is about to graduate and head off toward a big, bright future that any kid would kill for: a full ride on a track scholarship, the world’s greatest best friend, and an aunt that has always provided for her. The problem? Madison just wants to find her birth parents, even if it costs her all of the above.
When her Aunt Ruth is kidnapped and taken to a hidden world called Everly, all of Madison’s plans are put on hold. Guided by a mysterious stranger, Madison and her best friend follow Aunt Ruth’s kidnappers through a portal into Everly. Traveling through fairy lit caverns and towering oak tree forests Madison quickly realizes that behind Everly’s beauty is a world of magic, violence, and shocking truths about her family.
There, armed only with an enchanted sword and a sharp tongue, she battles her way past deceptive witches and bounty hunters to attempt a dangerous rescue that changes both her and Everly’s future forever.

This is a typical Young Adult Fantasy - a girl on the cusp of adulthood who finds she has an otherworldly home and lineage that makes her hero to some and danger to others. That said I liked Madison - she's snarky and a little awkward that makes her very relatable as a character. Her relationship with her best friend is by far the most amusing part of the book causing me to laugh out loud several times. You also have a future love interest in Ren - who is just as awkward as Madison so it could be a long wait for that to kick off.

I didn't understand the need for Jason (Madison's best friend) to be gay. As a writer myself, it feels as if it was done solely to make it clear to the reader there is no chance for the stereotypical falling in love with your best friend. Now I have no problem with gay characters in young adult stories - but this was a little like having a token black guy in a film. I will take this back if future volumes sees this aspect explored more.

Other things that bothered me are that I was left with more questions about Lacy's parentage than Madison's and there was a time junp, that when I did the maths left me very confused and viewing certain characters in a new light.

However, it has a good pace, with lots of action. It was a little light to start with but got a tad darker towards the end which I liked. I don't like fantasy that is wishy washy with clear heroes, villains and unicorns running around farting rainbows. Its the sort of book I recommend one reads for themselves though. Its a bit like Twilight, you'll probably either love it or hate but do form your own opinion. 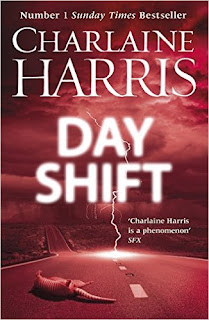 Welcome to Midnight, Texas.
It's a quiet little town, perched at the junction between Davy Road and Witch Light Road, and it's easy to miss. With its boarded-up windows, single traffic light and sleepy air, there's nothing special about Midnight . . . which is exactly how the residents like it.
So when the news comes that a new owner plans to renovate the run-down, abandoned old hotel in town, it's not met with pleasure. Who would want to come to Midnight, with its handful of shops, the Home Cookin diner, and quiet residents - and why?
But there are bigger problems in the air. When Manfred Bernado, the newest resident in town, is swept up in a deadly investigation suddenly the hotel and its residents are the least of the towns concern. The police, lawyers and journalists are all headed to Midnight, and it's the worst possible moment . . .

I enjoyed this book more than the first one. The mystery felt better planned out. I also enjoyed seeing some of the characters from the Sookie Stackhouse series make an appearance - a couple of which I had longed to see again but it confirms my theory that she is pulling all her series together making it one world. Midnight seems to be a town that attracts the more interesting side characters from her other books and gives them lives of their own.

The original characters of the series get more and more interesting. I am really looking forward to the final installment of this trilogy. 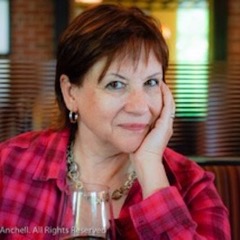 1. Tell me about your book and where you got your inspiration for it?

House of the Moon: Surviving the Sixties is a dark, disturbing, but ultimately triumphant memoir about my coming of age in Los Angeles during the decade that changed the world. I write historical fiction about women who have been marginalized throughout history, and one day realized that I am one of those women, and decided it was time to write my story.

2. How do you come up with titles for your books?

House of the Moon, is personally significant. My mother named me Donna, which means Lady, and Diane, for the goddess of the moon. This book invites readers into my house, my world. With my historical fiction books I search for the one statement that sums up the core message and makes a promise. For example, The Last Magdalene promises the reader that the protagonist will become the last Magdalene, just as the Last of the Mohicans promises to show how Chingachgook becomes the last of the Mohicans.

We have heard from rock stars and record producers about the high life and excitement of the sixties, but we haven’t heard from the young women in the trenches; women who faced social and political repression; women who were blamed for domestic and sexual violence committed against them. I wanted people to know that the sixties were a time of social upheaval that gave birth to the women’s movement, but there were reasons for the battle to be fought in the first place. Also, that it was a hard fought battle with many causalities.

4. How do you feel about public appearances? Do you do them often?

Writing is a solitary endeavour, so I look forward to meeting both readers and writers in social venues. I love book signings, workshops, conferences and discussion groups. I attend as many as my writing schedule allows. I always leave energized and excited about my next project.

5. If you were asked to review a fellow author/friends book would you be honest?

Absolutely honest. However, I never want to discourage a writer, so my reviews are always constructive.

I’m working on the final edit of my next book, The Last Magdalene, and then it’s on to the next two books in the series, which are first drafts needing attention. When The Magdalene Chronicles are finished, I’m looking forward to writing about Siegse, circa 420CE, the Frankish queen who was a renowned battle commander and founded a dynasty that ruled for three centuries. From there I’m shifting hemispheres to Cuba, and writing about three women in different time periods who participated in revolutions on the Island from 1498 through 1959.

7. How do you motivate yourself to keep writing?

The stories themselves keep me motivated. There are so many women that have changed the course of history, and yet we know so little about them due to patriarchal paradigms. I feel a compelling need to tell their stories so they are not completely forgotten.

8. What was the last picture you took with your phone?

A stack of House of the Moon: Surviving the Sixties at an autograph party during the Pacific Northwest Writers Association Conference in Seattle. It is a beautiful sight to behold!

9. What question do you hate to answer?

What I write with, pen, pencil, computer…

10. Do you have anyone you go to for advice? In person or Online?

My husband, who happens to have been a magazine editor. I’m one lucky writer.

11. If you could spend the day with any character from fiction who would it be?

Eleanor of Aquitaine, the year after she married Henry Plantagenet.

12. Glass half full or half empty?

What glass? I head straight for the full bottle!

13. Where is your favourite place to go on a weekday afternoon when you have no plans or obligations?

A rocky beach just north of Pacific City, Oregon, especially on a foggy day. I think I’ve watched the 1947 movie, The Ghost and Mrs. Muir, too many times. 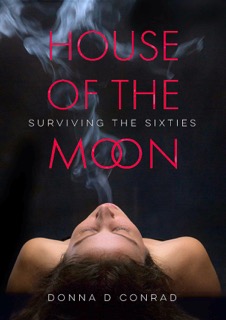 From encounters with Jim Morrison, Jimi Hendrix and other legends of rock 'n' roll, to loaded shotguns at home, sexual violence in the streets, and flying high on drugs just to get by--this fast-paced memoir brings to life Donna Conrad's quest to change the world--only to find herself changed by the times. House of the Moon is a haunting and ultimately triumphant memoir about coming of age during the decade that changed the world

Donna Conrad is an award winning author, journalist, activist, and teacher. Her core values revolve around individual empowerment, a sustaining ideal running through the books she writes, as well as her varied interest in the arts and sciences. Her memoir, House of the Moon: Surviving the Sixties was released August 1, 2016, by Cold Creek Press.  Donna lives in the Pacific Northwest with her husband and their three cats. When she's not writing, you can find her cruising the backroads in her Miata MX-5, Maya - named for one of her all-time favourite poets, Maya Angelou.