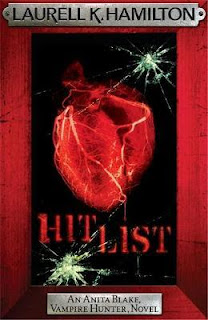 A serial killer is hunting the Pacific Northwest, murdering victims in a gruesome and spectacular way. The local police suspect 'monsters' are involved, and have called in Anita Blake and Edward, US Marshals who really know their monsters, to catch the killer.

But some monsters are very real. The Harlequin have been the bogeymen of the vampire world for more than a thousand years; they are a secret so dark that even to speak their name can earn you a death sentence. Now they are here in America, hunting weretigers, and human police.

The Harlequin serve the Mother of All Darkness, the first vampire. She was supposed to be dead, but only her body was destroyed. Now she needs a new one, and she's decided that Anita Blake's is the body she wants. Edward thinks the serial killings are a trap to lure Anita closer to the most dangerous vampire they've ever hunted. The vampires call Edward 'Death,' and Anita the 'Executioner,' but Mommy Darkest is coming to kill one, and possess the other, and she doesn't care how many others have to die along the way.
As it turns out this might actually have been a re-read for me. I couldn't remember where I'd gotten to in this series when I had stopped reading it for reasons even I can't remember. There were parts of the book that seemed familiar but I'd forgotten the majority of it so it was enjoyable.

I was glad however to return to Anita's world and found that I missed it. The plot of this book had a better balance between the police work and the sex without one over shadowing the other that had become a problem in some of the previous ones. It was also a really good point for me to jump back in as it reminded me about a great many of the characters - there had been an explosion of new ones in the previous few volumes if I remember correctly - and it was easy to work out where Anita's life was at.

I enjoyed the police work though I have to wonder how many men in law enforcement are actually like that. Constantly ragging on the woman in the group to both prove herself in the field and be the picture perfect ideal of femininity. They certainly weren't my favourite characters with their double standards towards sex. And I still don't know why Marshall Raborn hated Anita so much. However I am looking forward to the next installments that are all lined up on my bookshelf. I may have stopped reading but I didn't stop buying lol.