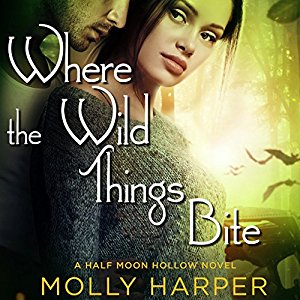 Delivering a rare book to a valued customer is definitely part of mild-mannered archivist Anna Whitfield’s job description. You know what isn’t? Protecting her precious cargo from mid-flight theft by the very pilot who is flying her to Half-Moon Hollow…while trying to appear as unappetizing as possible to the only other passenger, a vampire. Undead bookstore owner Jane Jameson could be waiting a very long time for her book. Possibly forever.

Fortunately, Anna’s dashing fanged companion Finn Palmeroy helps her fend off the attack, but not before their plane crash lands in the forest hundreds of miles from civilization. Great, now she’s stranded with a priceless tome and a rakish vampire whose bedtime is fast approaching. Why does everyone want this book so badly, anyway? Anna just wants to get it to Jane before Finn decides to turn her into dinner—or sweep her off her feet. Okay, the second option is really tempting. But they’re not out of the woods yet

I found with this tale it was almost as if Anna and Jane had been separated at birth. They both have a verging on unhealthy attachment to books. I found Anna very relate-able because of this as I myself have a great deal of care when it comes to the reading and treatment of books. I enjoy the fact that all the books in the Half Moon Hollow Series have the same narrator and characters that cross from one book to another, get to keep their own unique voice, though there are sometimes I think when the narrator gets a little muddled.

Finn Palmeroy, the main vampire in this book, we first met in the Single Undead Moms club when he turned Libby Stratton. He is a devilish rogue that you know is up to no good but happens to have a soft spot for the anxiety plagued Anna who occasionally manages enough of a back bone to give him what for. They are the ultimate expression I think of opposites attracting. With Anna's past, her confidence is shot where as Finn has it in bucket loads, using it to get himself out of trouble or deeper into it.

The other Half Moon Hollow cast don't appear in this book until almost the last third, which was nice, in the sense that you got to spend more time focused on the main two protagonists (Anna & Finn) but by the end, they were a welcome addition to the story to wind up the plot. I was also pleased to see Anna come out of her shell just a little more by the end, enough to get revenge on the man who destroyed her life anyway. Victory thy taste is sweet.