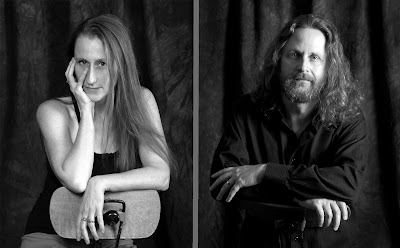 1. Tell me about your book, Things They Buried, and where you got your inspiration for it?

Amanda: Michael and I have been worldbuilding since 2004, so Ismae is a deep, detailed world. The inspiration for it grew out of characters we created while playing RPGs. We were bored with the traditional fantasy worlds and started building out what was in our imaginations. We’d taken notes for years, but in 2015, we finally started writing the short story that turned into part one of Things They Buried. We’d both been writers before then, but a book was a new experience—easier because we enjoyed what we were doing, but tougher because it meant so much more to us than writing someone else’s copy.

Amanda: So much! We’ve both worked in tangential industries before—print and online design, copywriting, editing—but that was for companies. Doing it for ourselves was a ton of work, and that continues with the marketing and the next novels. Indie-publishing is a marathon, and there’ve been times when one of us has wanted to chuck it, but we kept one another going.

Michael: I learned a number of things about natural sciences and physics that I hadn’t known previously. I’d detail further, but that would be telling.

Michael: As far as fiction, I finally read Alfred Bester’s The Stars My Destination. I found his main characters compelling and delightfully flawed. I also read the first three volumes of the Foxfire books, as much for the prepper in me as for the research into ways people live.

Michael: 1) Andre Norton’s Yurth Burden, I started it, but was side-tracked by some final work on Things They Buried. I love her stories. She had a gift for writing meaningful pulp. 2) Neil Gaiman’s Norse Mythology, My history with his stories is mixed, but I do love his word-craft. I’d rate my knowledge of world mythology as better than average and I’m looking forward to experiencing some of it through his voice. 3) Octavia E. Butler’s Wild Seed, She is an author I have meant to read something by for years now.

5. Have you ever danced in the rain?

Amanda: I have trampolined in the rain, but I wouldn’t really count that as dancing. It was a lot of fun. Probably crazy-dangerous, too.

6. Which do you use more often, dictionary or thesaurus?

Amanda: Thesaurus, definitely. Of course I spend all that time finding just the right word then turn around and change it during editing.

Michael: Thesaurus. I really miss a big fat Roget’s hardback I had back in the 90s. One day I’ll find another copy of it. The best I have currently is Rodale’s Synonym Finder.

Michael: Not at all. I don’t have the wherewithal to keep up with that.

8. If you could bring one musician back from the dead, who would it be and why?

Michael: David Bowie, something has felt off in the world since he left us.

9. What motivates you to succeed as a writer?

Amanda: Writing, specifically fiction, is the one thing I’ve always wanted to do, but the whole engine of “earning a living” kept me too busy to pursue it for quite a while. I wrote my “million words,” but I wrote them for someone else and mostly about things that didn’t’ matter to me. The idea of chucking the office career was scary, but I reached a point where living the rest of my life without trying to write my fiction was scarier.

11. What genre do you write in and what draws you into this genre?

Amanda: We had some difficulty pinning down our genre at first because it’s so mixed. On the highest level, we’re science fantasy—not Earth-based enough to be hard sci-fi and not classically fantasy enough to fit there either—with a lot of dark fantasy or grimdark thrown in. So science fantasy with dark themes, antihero characters, and a lot of action/adventure.

The genre appeal to me because it allows us to really play with science without being too constrained by Earth history, customs, and technology. Ismae is a world with multiple sentient species and high technology, but no fossil fuels, no plastics, no gunpowder, and no computers. Taking some of our real world’s day-to-day issue out of the equation made us be more creative, asking ourselves how these people would solve their day-to-day issues, what social problems they’d face, what social taboos would have developed.

12. Have you ever considered collaborating with another writer? If Yes who, if no why not?

Amanda: Obviously yes. We’ve often said “I don’t know how other people do it alone” because virtually every part of this process has been enhanced by working as a team. Our writing styles and skill sets complement one another in a way that makes both the storytelling better and the less-creative aspects easier.

13. Have you written any other books that are not published? Do you intend to publish them?

Amanda: We’re almost through the first draft of a story called The Long Game. It will be six short novels, each its own adventure, but all tied together with an over-arching plot. We’re aiming to publish the first later in 2019. We also have a draft of a longer novel, working title Warm Hold, but we’re sitting on that until we complete some storylines started in Things They Buried. All of them take place on Ismae. Characters drift in and out of all the stories, so readers can really get to know all the different connections.

14. Do your characters seem to hijack the story or do you feel like you have the reigns of the story?

Amanda: We start out with basic ideas of who they are and where they’re going, but the characters definitely influence us as they move through the story. We’ve had a few where we’ve developed great character concepts, but as we start fitting them into the story, they’re just duds. We kill them.

Michael: In some cases we go so far as to erase them altogether.

15. Is there anything I’ve left out that you’d like to talk about?

Amanda: Yes, our website, Ismae.com. It’s sort of a companion to the novel and the world in general with concept art, audio pronunciation guide, and short fiction. New stuff monthly. 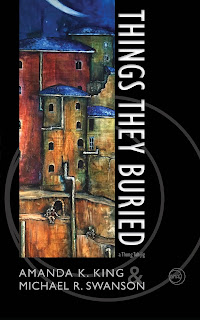 Under the dirty streets of Ismae’s greatest port city, an old nightmare waits for Sylandair and Aliara, one that is stealing Dockhaven’s children, one that only they can end.

When the pair escaped their owner and abuser years ago, they left him behind in a ball of blue flame, but as more children disappear near Dockhaven’s desalinization plant, they believe he may not be dead.  When they embark on an underground search for him with their less-than-reliable puka scout Schmalch, what they find is beyond any expectation.  It will lead them into a twisting world of inheritances, experimentation and memories they never wanted to exhume.

Things They Buried is the first full length novel of Ismae, a planet where bodies can be re-crafted at the genetic level while photography remains a luxury available only to the rich.  It is a world where science sometimes appears as magic and history as myth, where monsters make themselves and heroes are wholly unintentional.


Amanda K. King
Both a reporter and a communication consultant in previous lives, Amanda spent way more years than she wants to admit writing news stories and marketing drivel for other people. Her part-time fiction turned full-time when she and Michael started Things They Buried. She is a fan of words and grammar and enjoys exploring how perspectives and circumstances shape the way different people deal with the same world.

Michael R. Swanson
Michael divides his time between writing, music, woodworking, and gardening. While he enjoys exploring our world, his imagination draws him to others. An indie songwriter who has turned his efforts toward prose, Michael focuses on imagery and emotion in his fiction, sometimes even bringing to life characters who have been with him since childhood.