Dusty Pages Review: The Island at the End of Everything 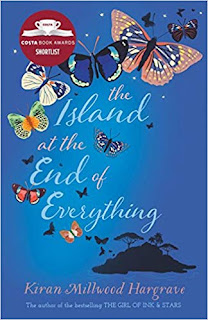 Amihan lives with her sick mother on an island where the sea is as blue as the sky. It's all she knows and loves, but the arrival of a cruel government official, Mr Zamora, changes her world for ever. Her island is to become a colony for sufferers of leprosy. Banished to an orphanage across the water, Ami meets a honey-eyed girl named for butterflies, and together they set out to find a way back home to the island at the end of everything.


I loved the first book by Kiran Millwood Hargrave The Girl of Ink and Stars which had a certain more fantasy element to it and I was hoping for something similar with this book. However, it is rooted much more in real life as it has real life places and events tied in with the story of Ami and her mother.

I enjoyed the read but its pretty much what you would expect aimed at this sort of age group, a clear outright villain, children getting one up on the adult world, and a friendship that time and distance won't destroy. I liked all of the characters very much, the story was interesting and easy to follow, there was a lot of stuff about butterflies which are my favourite of all bug/bug like things, and I'm sure there was a life lesson about not judging people by appearance thrown in with everything else just for good measure.

The only thing I didn't really like what that unlike in a lot of tales of this sort, the bad guy doesn't get really get what I think was coming to him, much like real life and in that respect I was a little disappointed. 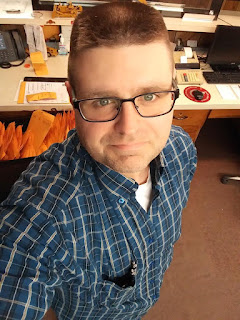 1. Tell me about your book, The Last Marines, and where you got your inspiration for it?

Corbin & Garrett must come to terms with a changed world, and their situation. The Commonwealth can’t protect them if they choose to go it alone. Powerful factions in opposition to the alliance have put a price on their heads. With no help, no friends and no resources they have no choice but to cooperate, at least for now. Garrett, the older of the two, Corbin’s friend, business partner and mentor was more extensively injured during the stasis recovery and required more evasive treatment at a Mars medical facility. The Commonwealth Fleet vessel where Corbin received his treatment has brought him to Mars to link up with the carrier group that will be accompanying Corbin to the Gar Rei Jhi home world of Jha Ni. Corbin isn’t the only one tasked with convincing their alien allies of humanity’s worth. Fleet personnel is tasked with establishing an embassy on Jha Ni and running joint missions with the Gar Rei Jhi. Many civilian contractors are also present to evaluate and coordinate scientific and logistical efforts.

The Commonwealth intends for Corbin and the carrier group to go ahead as Garrett stays behind and convalesces before joining the mission.

What exactly will be expected of Corbin is unclear, but the Commonwealth and the damn aliens both know he’s no diplomat.

Corbin isn’t satisfied with the restrictions placed upon him when he is allowed to visit the surface to see Garrett and he breaks ranks in an attempt to find some closure regarding his long dead wife.

2. What is the most influential book you’ve read in the last year?

The Republic by Plato

Sam Rockwell, Don Cheadle, Ed Norton, Idris Elba any of those guys or probably a hundred others. I just want a good actor who can pull off a former Marine suffering from PTSD.

4. What are the top three books in you TBR pile?

3. The Complete Cornicles of Conan by Robert E. Howard

5. You’ve just been kidnapped and the people from the last TV Show/Movie you watched have to save you. Who is it?

6. If you could bring one musician back from the dead, who would it be and why?

7. In what ways do you hold yourself back?

It’s kind of funny I’m 41 years old and I still keep the fact that my parents will read my work in the back of my head when I write.

8. What motivates you to succeed as a writer?

I’d love to make a living writing, or at least supplement my income with money made from my writing. Just to give my wife and kids a little bit better life, take vacations and just be able to devote a full work day to something I love to do.

9. Would you rather explore a new planet, or the deepest parts of the ocean? Why?

Definitely explore a new planet. I’ve never been much of a swimmer.

Any way I could. I’d load up the guns, food, ammo and water at the house and head for the hills where there are the fewest people. Eventually find a little island on a lake somewhere clear it out and set up shop. Scavenging, farming, collecting livestock where I find it.

The deaths of our heroes and the depictions of the same in films, TV and books.

12. What genre do you write in and what draws you into this genre?

Science Fiction. I guess I’m drawn to it because there are no rules really. You can make up your own world just how you want it or fear it might become. You are free to explore infinite possibilities. That and my imagination has just always gone that direction for some reason.

13. Do you think the cover plays an important part in the buying process?

Oh, yes. The cover is huge, especially for lesser known authors. It is the first think people see when looking for a book. You might have a great story and a great blurb but you’ve got to get people to pick it up first.

14. What are your thoughts on good/bad reviews?

Not everyone is going to like the stories you tell or how you tell them. Even some of your best fans will eventually run into something of yours they don’t like. That being said, some reviews just seem extreme and malicious and makes you wish the people that read those reviews would also look and the average rating that reader gives all books. Good reads I know does this.

15. Have you written any other books that are not published? Do you intend to publish them?

Yes, I’ve also written a sequel to The Last Marines and I’m currently working on a spin off series and three short stories that will be included in short story anthologies later this year. Two of those shorts take place in the same universe as The Last Marines. I’m saving up money for editing and cover art so I can get book two in the series out on the market. In the meantime it seems I’ve been bitten by the short story bug. Didn’t think I’d enjoy writing short stories as much as I am. 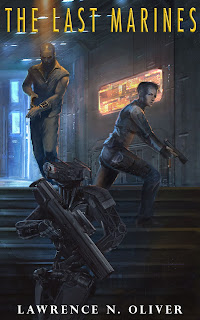 Having been replaced by robots and drones, veterans Ben Corbin and Sam Garrett go into business for themselves towing derelict vessels and space junk out of the shipping lanes around Mars.
Business was good, but a couple of malfunctioning service robots forced them to return to Earth for replacements. Aliens attacked the freighter they’d booked passage on, slaughtering and feeding on the crew and passengers. Only Corbin and Garrett managed to hold their own until they could hide in stasis pods.

Thrust into a new age of engineered soldiers, interplanetary politics, and self-aware robots, Corbin has to quickly decide who he’s going to trust as he journeys back to the Mars colony. But his search for truth may come at the cost of his life, and the fate of the Commonwealth may rest on his decision.


Lawrence N. Oliver struggled in school. He has dyslexia and he hated reading, especially aloud. So, his father bought him a copy of The Foundation and The Hobbit. He can’t remember which was first but he fell in love with the genres. One day he found himself home alone, reading a book, looking out the window, and thinking of a different story. So he put down the book he was reading and he started writing.