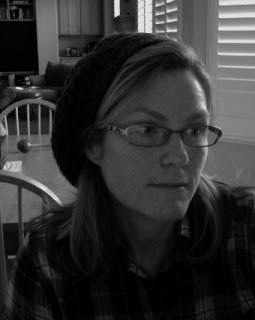 1. Tell me about your book, Fiona Thorn and the Carapacem Spell, and where you got your inspiration for it?

A few years ago some friends from Pennsylvania were visiting us in California. We spent a day driving to state parks and showing them the area. It was a long day in a car packed full of kids. It didn’t take long before their three girls and my daughter were bored. So, I started telling stories with them. They decided they wanted a princess adventure, complete with evil witches, magic and fairies. By the end of the day they each had super powers, special outfits, everything, and when we got back home they asked me to write it for them. It took on a life of its own. Fiona Thorn and the Carapacem Spell was born that day on the road. I owe it all to those four magnificent girls, Rehanna, Victoria, Makenna and Emma.

I would like to be remembered as someone who brought a smile; maybe through a fun, imaginative book a child happened to discover, or by brightening my family’s day by baking a good cookie. I’m a nurturer, so I guess I’d want my tombstone to say something like, “She made great sandwiches and kept us stocked in cookies.” Pretty deep, I know. :)

Pirates. Pirates are badass.They have it all; long hair, boats (I love boats), guyliner (I’m an 80‘s girl), and of course, the rum. To boot (see what I did there) I’ve never seen a ninja look like Johnny Depp or Orlando Bloom. Case closed.

4. Are the names of characters in your novels important?

Names are SUPER important. The right name can evoke a sense of the character before the reader even knows what’s happened, before they’ve even really gotten to know the character. I think very hard about all the names of characters. It’s one of my favorite things about the process. Place names, too. Everything. It all counts.

5. Would you rather write for children or adults?

I enjoy both. Writing for children, like in Fiona Thorn and the Carapacem Spell, or my picture book that will be released soon, If Chocolate Were Purple, really allows me to tap into the whimsical, light side of my personality. I can be as silly as I want and still feel at home.

Writing for adults can be great, too. I’m not always silly, and can be quite sarcastic. I have a pretty dry, biting sense of humor that usually isn’t appropriate for kids, so it’s with adults I can explore that more freely. And of course there are just subjects that kids are not ready to deal with that can be satisfying to work on as a writer, like drugs, sex, violence, etc.

6. Have you ever killed someone in a novel and regretted it later?

No, but the opposite happened. In an early version of Fiona Thorn and the Carapacem Spell a sweet creature that Fiona and the princesses become friends with was injured but recovered. My daughter read it and shook her head. “The Cave Bodkin has to go.” It was a good lesson. It reminded me to be mean, mean, mean to your characters. Readers won’t have anything to empathise with if the characters aren’t in upsetting situations.

7. What are the most important attributes to staying sane as a writer?

I have yet to figure this out. ;) However, I’d list a really thick skin, mixed in with a heavy dose of perseverance. After that, I’d suggest finding a way to focus and keep the thousands of distractions at bay. It’s awfully easy to lose a day on Twitter, thinking you’re promoting your book. I’m beginning to realize that I’m probably better off spending the day writing the next book.

8. Do you believe in love at first sight? Have you ever experienced it?

I do. I was so lucky when I met my husband. We were in college, many many years ago, and it really was love at first sight. It’s a hard thing to describe, but I think it’s the unwavering certainty you feel in your gut. It hits you, and for some indescribable reason, you just know. That’s how it was for us. I am so grateful for it everyday.

9. How do you overcome writers block?

Exercise helps. Before our two English Setters passed away I would take them out for a walk. The fresh air and just getting out in the world really helps me shake things loose. Sometimes it takes days, or even longer, but exercise has always been very helpful for me.

10. What is your favourite quote?

“It is absurd to divide people into good and bad. They are either charming or tedious.” — Oscar Wilde.

Pretty much sums it up, I think.

11. What three things would you save from a fire at your house? (assume that all your family get out safe.)

We’ve had a vintage Mickey Mouse toaster for years. We inherited it from my little brother, maybe twenty years ago. It sings the Mickey theme song and toasts a smiley face on the bread. I’m not even a big Mickey fan, but the irony in this thing is amazing. If you could hear its alarmingly cheery tune at 5 am, you’d be a believer. I’d have to take that.

I suppose I’d grab my phone. Lame, but true. All our pictures are digital, so they’re safe...

I know! My Le Creuset dutch oven. It’s a perfect size for everything from searing and braising to just making soup, it’s a delightful shade of mustard yellow (my favorite color) and has been used so much over the years that it’s really been seasoned well. I could buy a new one after the fire, I suppose, but then I’d have to spend twenty more years seasoning it. Yeah, I’m taking that too.

12. What are your current projects?

I’m working on the next book in the Fiona Thorn series, called Fiona Thorn and the Secret of the Ringing Trees. I’m in the outline stages of that, just letting ideas percolate and solidify, but it’s progressing nicely. I’ve got some really exciting things planned.

I’m also working with an artist on the last stages of a picture book called, If Chocolate Were Purple. The story is a rhyming poem that follows a young child and mom through a day filled with strange things; swimming bumble bees, glow-in-the-dark bananas and curly-haired fish, just to name a few. By the end of their day the message is clear; no matter how different things get, the love we feel for our kids is always the same.

This is something I’ve been wanting to do for a few years and it’s almost finished. I am so proud of it and can’t wait to see it realized!

13. If you could chose one person, living or dead, real or fictional to mentor you, who would you chose?

The writer side of me wants to say JK Rowling, because I admire her so much, to be so commercial and yet have influenced the world so positively with such a classic story is inspiring. And yet the human side of me wants to bring Steinbeck’s Samuel Hamilton to life to remind me how to smile. If I could be anyone, real or imaginary, it might be him. He always had joy, and at the heart of things, isn’t that what it’s really about?

I weep for Cold Mountain. I literally cry every time Ada looks backwards into the well at the Swangers. It is so beautiful, so grand and yet so intimate. I love everything about that book.

15. Do you prefer ebooks, paperbacks or hardcovers?

I prefer paperbacks. I am warming to ebooks. They are extremely convenient, I get that, but I miss the smell and feel of a real book. The musty scent of old paper and the crinkling sound it makes as you turn the pages...it’s part of it for me. I just think I’m always going to prefer a paperback. 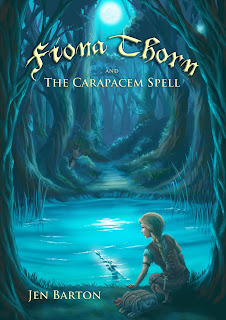 When Fiona Thorn, an ornery orphan with an expertise in explosives, sets out to rescue her imprisoned friend, Jaydin Rowan, she wants nothing more than a few sleeping guards and a satchel full of Blast. What she gets is a run-in with three bickering princesses that puts all four girls on the wrong side of a locked dungeon door.

Now, accidentally involved in a plot to assassinate the King and accused of kidnapping the princesses, Fiona must find a way to free them all, save the King, and rescue Jaydin, all while struggling to pay the magical debt that’s slowly killing her. Unless, of course, the princesses annoying sibling rivalry kills her first.

Packed with powerful magic, fun-loving fairies and a vicious ogre turned pet, Fiona Thorn and the Carapacem Spell is a fantasy kids’ book sure to become a favorite in middle grade fiction.


Jen Barton was born in Williamsport, Pennsylvania in 1971 and spent much of her life on the East Coast. In 2008, at age 36, she and her family moved to California. With two cars, she and her husband moved two dogs, two guinea pigs, a cornsnake and their 10-year old daughter across the country. She counts the five day road trip, including a near escape by both dogs on Day 3, as one of her best experiences to date.

In 2009, with a Bachelor of Arts in English and Philosophy from Millersville University, Barton realized her childhood dream to become a writer. One van full of bored kids, one long day of travel, and Fiona Thorn was born. She’s been writing ever since.

When not taxiing her teenage daughter hither and yon, Barton loves reading (especially fantasy by George R. R. Martin), cooking (anything with pasta is a hit), and writing (magical worlds with obstinate teen girls is always a favorite)