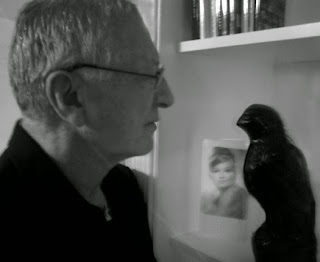 1. Tell me about your book All In, All Out and where you got your inspiration for it?

The book is a short novel about “the perfect crime”: rob drug dealers exchanging money. One brother, Roy, gets his two younger brothers involved with an ex-cop, a thug, and a sharp lawyer. One brother, Dean, has a past as a hardcore criminal but now is trying to go straight. But he's laid off from work so he buys into the deal. He is the one who realizes the robbery involves killing every one of the drug dealers. He also lives with a woman and her young son and hopes to set her free with the cash.

I got the idea for the story by wondering what would be the perfect crime. Then I decided to write the story without frills, in pared down prose, in present tense and short scenes similar to a movie. The book is divided into sections based on the poker game Texas Hold'em.

I want to be clear: it is not romance or sweetness and light. The characters are thieves, drug dealers, killers, with the effect on a mother, her young son, and innocents caught in the middle.

2. Who is your role model and why?

Two writers that I really like and admire: Pushkin and Faulkner. Why? Because the first is classically clear and the second has an almost desperate intensity.

3. If you could cast a Patronus Charm (like in Harry Potter) what animal would it be and why?

A cat. Why? Because cats are independent and have a natural cool air and style. But, in fact, I'm probably really an old dog.

4. What do you think is the biggest challenge of writing a new book?

Making the main theme or driver clear, keeping it from being submerged in a sea of details.

5. Are the titles of your books important?

Yes. I spend some time on them and often change them doing writing.

6. Are there any occupational hazards of bring a novelist?

Yes, poor pay—if there is any at all. Grace Paley's advice is apt: if you want to write, keep a low overhead.

7. How much of your book is realistic?

I hope all of it. I tried to make it as realistic as I could. I suppose you could call it naturalism, hardcore naturalism...without psychology.

8. What is your favourite character from your book and why?

Dean Powers. He is not likable or even a good guy, but he lives by a code and takes the consequences. I have known men like that.

9. Have you ever written a book that you loved but were unable to get published?

Yes, a book of three stories that I think are the best things I've written. I've been told they are too literary or do nothing new. Also, they are in a form no one likes: 40 to 80 page stories. I think it's ideal but I'm pretty much alone in that. Most of my favorite stories are that length: “The Queen of Spades,” “In the Ravine,” “Three Years,” “The Man Who Would Be King,” “The Death of Ivan Illych,” “The Bear,” and so on.

10. Do you read your reviews? Do you respond to them, good or bad? Do you have any advice on how to deal with the bad?

I've read some. I don't respond to good or bad. I think a reviewer should lay out a measure so you understand where he's coming from: list the books he thinks are great, those mediocre, and those that stink. That way you can evaluate his opinion. I've read some incredibly stupid reviews of good books and reviews of bad ones that the reviewer rated highly. Probably the best thing to do is never read reviews of your own stuff. I will say, though, that I haven't seen a book reviewer as bad as most movie or TV reviewers.

11. Are you a full-time or part-time writer? How does that affect your writing?

Now I'm able to write full time. Before, if I wanted to write, I had to get up at 3 AM or so to write before going to work. My first book (The Enchanted Sticks) was written that way. Now I feel less pressure.

12. What do you like to read in your free time?

Faulkner, Pushkin, Chekhov, Shakespeare plus Simenon's Maigrets, V.S. Pritchett's essays (the book is falling apart). Recently reread Chekhov's “The Duel” for technical reasons: to see how he shifted through five characters but kept the narrative going. If I like a story, I'll go back over it to see how it was done. I've learned from O. Henry as well as Tolstoi. I just read Cather's O Pioneers and was impressed. Death Comes to the Archbishop is next. I tried to read it when I was 15 or 16 but didn't appreciate it. I wasn't grownup enough to understand it. It seems that some writers you have to grow into and others you grow out of.

13. What are you ambitions for your writing career?

I have a list of several more books I want to write and I suppose I'll write a poem once in a while, but a time will come when, to quote Faulkner, I'll break the pencil.

14. Do you have any advice for authors on how to market their book?

No. I need the advice. I've considered mass hypnosis but I can't find a hypnotist cheap enough. Obviously Stephen King, James Patterson, etc., can afford him (or her? Most likely, her). I thought running for a political office and get involved in a sex scandal would work but my wife informed me that, one, no one would vote for me, and, two, to look up “eunuch” in the dictionary. Trying to get reviews is hopeless. I thought of using Whitman's game of writing your own reviews but then you need outlets and the stomach to praise yourself. I'm now studying subliminal advertising.

15. Is it wrong for vegetarians to eat animal crackers?

A wolf head with claw hands. I used it later in the first story I published in a long time: “A Werewolf with Flowers.”

17. What was the first thing you bought with your own money?

The first big thing I bought with my own money was a typewriter. I began setting bowling pins for ten cents a line when I was 14. I saved up enough to buy a Royal typewriter and wrote my first play on it, which was performed at my highschool.

I'll quote a piece from All In, All Out:

Dean buys a pick, a shovel, and a large bag of lye at a farm-hardware store. Then, he drives to a shady area in the country. With the pick and shovel he digs a grave.

He carries Earl's blanket-wrapped body to the grave and sets it in. He empties the bag of lye on the body and begins to fill in the grave. Birds chatter and fly in and out of the trees as he shovels the dirt in slow, steady strokes. 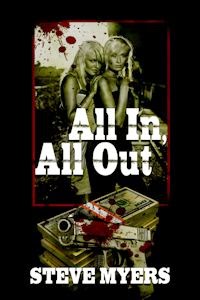 The perfect setup is to rip off a drug deal for a million.

Dean Powers knows he and his brothers can take the money and run. First he must kill, kill, and keep killing.

There is no telling when will the killing and the running end. Perhaps it is in the cards.