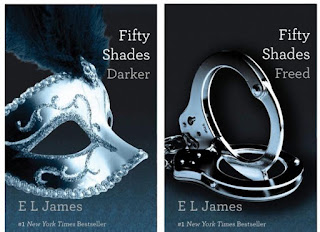 I'm going to do both these books at once because taking up two weeks worth of review spots. I have to say I did like the next two installments in this trilogy a little bit more than the first. I liked that these two had a proper villain in them to drive the plot a little. Of course Christian over reacts to every little things still and Anastasia still thinks he so attractive every five minutes but I've come to realize that's just the way they are going to be.

I like that we learn more about what drives Christian and that Anastasia actually helps to change, to face some of his demons in order to win and keep her love. However I got bored with the sex. Not something I would normally say ;) but there was just so damn much of it and it was all a bit samey. Stagnant. I found myself scanning over those passages to get to a part of the story that drives the plot forward. I certainly wasn't - whats the phrase I saw recently - reaching for a glass of ice water.

However there were still bits of the story I liked. Ana and Christian's emails as I found in the first book were just a hoot. I loved some of the terms the author penned like Shouty Capitals and Kinky Fuckery.

Of course we find the story has a happy ending - kind of to be expected in this sort of romance epic but one thing bothered me. I knew exactly where the story was going, the main plot points at least because it followed almost exactly the same as Twilight. This should not be surprising to me as I know Fifty began as Twi fan fiction. I think E L James could have done so much more with them if she'd just stepped a few steps further away.

I give both books 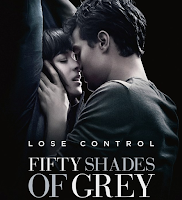 I finally gave into my curiosity. However I started with the movie. I wasn't that impressed but there was enough of a spark of interest to make me look at reading the book. The thing I know about movies compared to the books they spawn from are they are like icebergs, the movie is just the tip above the water and the book is the bulk you don't see under the surface.

I found Fifty Shades in a charity shop - which is part of the reason why I purchased it - and I read it in one sitting. Now don't mistake that for not being able to put it down. I could have put it down the thing is I knew that if I did I would probably not come back to it.

Ana - I felt as if she almost had a complete personality swap by the end. Clumsy and Shy when we first meet her but she's a lot stronger than that under it all. A typical introvert. I did get sick of her constant references to how handsome Christiann is and how she's not. She had to mention it every chapter at least once.

Christian - What is this guys major malfunction? Talk about a revolving door of moods. He's stalkery and controlling which I suppose is the point but not enough of his history is revealed in the first volume to make me understand him. I'm with Ana on the whole "you want to see me in pain" stuff and honestly he's proven he can do romance, so why can't he pull his shit together.

The Sex - I was not thrilled. There was nothing for my imagination really to do and I've read better.

The Writing - Not wonderful but not as bad as some people would have me believe. I cringed over a few sentence thinking that some of the editors I've known would have kicked my ass for using them.

Twilight comparisons - Yes I can see it. Ana however is slightly less pathetic that Bella, as Ana fights to be who she is, not just to have him as her boyfriend. She ends things where as Bella never did. Christian is also way more screwed up in the head than Edward. Jose compared to Jacob, a lot less screen time and a lot less funny.

I was however amused by whole segments of Ana and Christian's email correspondences, proving that there is good in every book. There were plenty of questions left unanswered and as I am a person who has to know, I will be reading the next two in the series. However, I think reading Grey might be completely unnecessary, at least until I find it in the charity shop bargain bin.

I give Fifty Shades 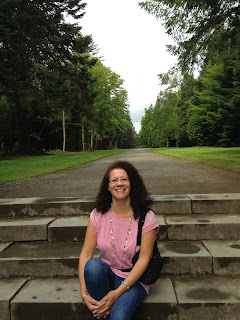 1. Tell me about your book What A Woman Desires and where you got your inspiration for it?

What A Woman Desires is my third Victorian romance with eKensington/Lyrical Press and is set in and around the famous city of Bath, England. The majority of the story takes places in the small village of Biddestone. I love the theme of women’s independence in my historical romances and Monica is a stage actress. This was a difficult vocation for women to obtain in the 1800s so I wanted to take the reader back to her roots…to how it all began.

2. What is one misconception people have about you?

That I’m confident! I am a very chatty person once I get to know someone but initially very introvert and tend to hold back and let others lead the conversation. One of my goals is to do a book signing/public talk one day but even the idea terrifies me!

3. What is your favourite character from your book and why?

Monica will always be very special to me because she appeared in the book before this one (The Temptation of Laura) and as soon as she appeared I knew she deserved a story of her own. Whenever she spoke to me it was like taking dictation. She was a joy to write. Strong, sensitive, caring and independent…I had a lot of emotion to play with.

4. Have you ever written a book that you loved but were unable to get published?

Fortunately no! I am lucky enough to have had everything I’ve written published although the first book went through many rejections and rewrites until it was eventually accepted by The Wild Rose Press. Since then, I have had at least one book a year released and now write for eKensington/Lyrical Press and Harlequin Superromance.

5. What was the toughest criticism given to you as a writer and the nicest compliment?

The toughest – I was told by a contest judge to give up because I would never be published. What is the purpose of saying that to someone pursuing a dream? I ignored the advice and hope every aspiring writer out there does too.

Biggest compliment – this is either when readers tell me a scene made them cry or when they say they couldn’t put the book down. Music to an author’s ears!

6. Where did your love of books/storytelling/reading/writing/etc. come from?

My mother. She is a voracious reader and encouraged my brother and I to be the same. I am happy to say it worked, we both read A LOT. Once I discovered Enid Blyton around the age of seven or eight, I knew I wanted to write and set about writing and making my own story books. It wasn’t until my youngest daughter started school that I had my ‘now or never’ moment and fully committed to my dream. The rest is history!

7. What are you ambitions for your writing career?

My biggest ambition is to continue to write for the rest of my life – I LOVE what I do. It’s a compulsion and I can’t imagine doing anything else. I would love to earn enough money to support my husband and kids and be able to travel while working. As for the writing itself, I really want to try the Georgian or Edwardian eras as well as big single title contemporary romantic suspense.

Yes – I am lucky enough to be a stay at home mum to two teenage daughters so I try to treat my writing like a full-time job and work from 8.30-5.30 during the week. I aim to write at least 2,000 words per day.

I actually write a series of books for Harlequin Superromance – they are either mainstream romance or romantic suspense stories set in the same UK seaside town of Templeton Cove. Writing a series is a dream come true for me. It’s something I’ve always aspired to do. I love bringing previous characters back, either in cameo or as a main character. as well as getting to know the town better with each new book. Templeton Cove is very special to me.

10. What happens when you get half scared to death twice?

Haha! Great question because I’m living proof of this! You walk around far more aware of the world, that’s for sure. The two events in my life that half scared me to death were my daughter being knocked down when she was twelve. She was thrown into the air and on the descent her head smashed the car windshield. After several hours waiting for an ambulance and in the hospital, she walked away with only bruising and lacerations. Miracle! The second was being rescued by helicopter during the 2010 French floods. 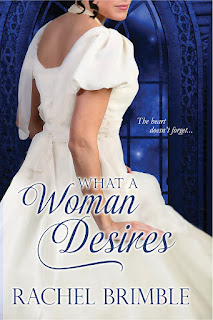 From country girl to actress of the stage, one woman dares to live her dreams—but is she brave enough to open her heart…?

Monica Danes always wanted more than the village of Biddestone had to offer. After a failed courtship to a man of her parents’ choosing, she fled for the city of Bath and never looked back. Today, Monica is the undisputed queen of the theater—a wealthy, independent woman. But when she is called home in the wake of tragedy, Monica returns—intending to leave again as soon as possible.

Thomas Ashby has been a groom at the Danes estate since he was a boy—and has been enamored with Monica for almost as long. He knows he isn’t a suitable match for his master’s daughter, despite the special bond he and Monica have always shared—and their undeniable attraction. But now that she’s returned, Thomas has one last chance to prove himself worthy—and to show Monica a life, and a love, she won’t want to give up...


Rachel lives in a small town near Bath in the UK. After having several novels published by small US presses, she secured agent representation in 2011. In 2012, she sold two books to Harlequin Superromance and a further three in 2013. She also writes Victorian romance for Kensington--her debut was released in April 2013, followed by a second in January 2014 and the third is released Jan 2015.

Rachel is a member of the Romantic Novelists Association and Romance Writers of America, and was selected to mentor the Superromance finalist of So You Think You Can Write 2014 contest. When she isn’t writing, you’ll find Rachel with her head in a book or walking the beautiful English countryside with her family and beloved black Lab, Max. Her dream place to live is Bourton-on-the-Water in South West England.