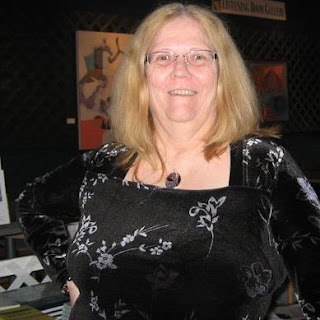 1. Tell me about your book Paranormal Petersburg, Virginia, and the Tri-Cities Area, and where you got your inspiration for it?

It is a nonfiction book about the ghosts and legends of the cities of Petersburg, Hopewell, Colonial Height, and the counties of Dinwiddie, Prince George, and Chesterfield (the town of Chester actually in this county). I had written two ghosts books for Richmond and surrounding counties and cities that included these cities and counties. Someone asked me at a talk and signing, would I ever do a book of the Tri-Cities. I submitted a book proposal to my publisher and it was accepted.

2. If you could cast a Patronus Charm (like in Harry Potter) what animal would it be and why?

Wolf or cat. Unless I could do a mythological animal, then a dragon, of course!

3. Are the titles of your books important?

I think so, especially for my fiction, because a good title as well as a cover attracts the reader. But the nonfiction ghost books should have the right titles, too. For I put Tri-Cities in the title of my new book and they thought Tri-Cities. I had to explain and get links to websites to back me up, that this meant for three cities-Petersburg, Hopewell and Colonial Heights. People who live in the area know the right way of saying it, Tri-Cities, and you do not want to upset potential readers.

4. How much of your book is realistic?

Well, there are legends in Paranormal Petersburg, Virginia, and the Tri-Cities Area, and hard to prove, except by paranormal investigating, and even that is not an exact science. But the history is true, as I researched for that portion and what I did on my investigations are what happened.

5. Did you learn anything from writing your book and what was it?

Don’t piss off the ghosts!

Let us just say the Confederate and Union spirits haunting Peter Jones Trading Post will do anything to get us to leave. You will have to read what happened to me and freaked out my other investigators, by reading the book.

6. What was the toughest criticism given to you as a writer and the nicest compliment?

Toughest criticism is that my fiction (and sometimes my nonfiction ghost books) can be scary. The nicest was from another writer at a critique group we both were part of. She called me a female Edgar Allan Poe. And since I like Poe, well, that was nice of her to think so.

7. Do you have any suggestions to help someone become a better writer? If so, what are they?

Write every day. Join a critique group or get a critique partner you not only trust, but will tell you the truth whether bad or good about your stories and novels. When your story, nonfiction book, or novel is edited enough and perfected as much as can be without losing your voice, then submit it. Grow a thick skin for rejections will come. Think of it like a job you are looking forward. You have not gotten jobs before, but your keep searching. Right? See if they left comments on why they did not accept and if you agree with what they say then take that advice to heart. Or submit elsewhere—not every editor will fall for your story, but there will be one that will.

If it works and the story is fresh. One fantasy author died with fourteen books in a series and I had read his later ones a few years later and I thought they seemed too much like his first ones. I know publishers push for more in a series that sells, but sometimes, the later books in the series are not that good and even deviate from what the main character was in the beginning. Not talking about growth here (a normal thing any character should be doing), but changed too completely from what the hero/heroine believed in.

10. Where would your dream vacation be?

Another planet or a world of fantasy. Since that will never happen, maybe that is why I write? 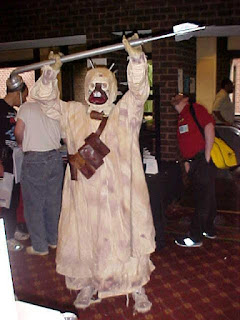 12. What was the first thing you bought with your own money?

I will say the first money I earned as a published writer—which was for three poems in a poetry magazine in 1972. A book, a record, and went out to celebrate.

Enjoying second breakfast with the hobbits in the Shire in Middle Earth.

Take it by ship to a spot in the ocean where plenty of sharks are and weight it down enough to sink down and stay down, but hoping the sharks will go down to it and eat it. 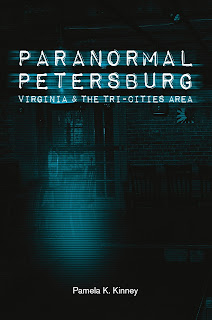 Travel to Petersburg, Virginia, and the surrounding areas of Colonial Heights, Hopewell, Prince George, Dinwiddie, and nearby Ettrick-Matoaca, Enon, and Chester to discover what spirits, monsters, UFOs, and legends await the unwary. Why are the Union and Confederate spirits still fighting the Civil War in the battlefields? Who is the lady in blue who haunts Weston Plantation House? Learn what the phantoms at Peter Jones Trading Post will do to keep from being photographed. Drink tea with runaway slaves still hiding on the top floor above the Blue Willow Tea Room. Are Edgar Allan Poe and his bride still on their honeymoon at Hiram Haines Coffee and Ale House? Why does the Goatman stalk young lovers? Meet the ghosts of Violet Bank Museum that greet guests at the house. Hauntingly active as they share space with the living, the dead refuse to give up their undead residency.


preordered at Schiffer Publishing, Amazon, AmazonUK, and Barnes and Noble.

Besides her nonfiction ghost books, Pamela K. Kinney has written fiction that enables her readers to journey to worlds of fantasy, go beyond the stars, and dive into the vortex of terror. One of her horror short fiction, “Bottled Spirits,” proved to be heart-stopping enough to be runner up for 2013 WSFA Small Press Award.

Writing under the pseudonym Sapphire Phelan, she also writes bestselling paranormal romance with dark heroes and heroines with bite!

She admits she can always be found at her desk and on her computer, writing. And yes, the house, husband, and even the cat, sometimes suffer for it!