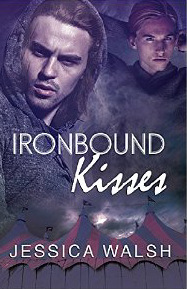 I featured Jessica Walsh on this blog a while back and she gave me a copy of Ironbound Kisses. I don't read a lot of m/m fiction. Mainly because as with most romance readers I like to slip inside the skin of the female half of a romance - which is the only reason this little beauty isn't getting five stars.

Thomas applies for a job with the circus because he doesn't mind the hard work or the fact that they will move around a lot, in fact he thinks its pretty much perfect for him. Then he see's this mysterious young man who lives inside the ringmasters trailer and he can't get him out of his head.

I liked the world building and the all the characters, there was a great amount of depth to them considering its not a very long book. Or maybe it just seemed so short because I read through it so quickly. The Romance was sweet - although there is a "sex scene" its not graphic, its done very tastefully. I like the classic mythos applied in the narrative and thought the ending was very sweet and satisfactory. 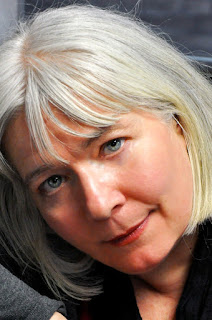 1. Tell me about your book, Perdita, and where you got your inspiration for it?

Perdita is an urban fantasy novel about a young woman who discovers that the fairy tales her dad told her are true. My inspiration: when I was in my late twenties I moved into a building in Chelsea, a part of Manhattan just above Greenwich Village. The building had been a flop house for sailors with bathtubs in the kitchens and toilets in the hallways. It was relatively unchanged in over a hundred years and felt magical, like a place that had escaped time.

I'm a panzer who needs to get it all down on paper before looking at what I have. However, I do need to know how my story will end before I can muddle through the middle section. I think people who outline first probably have an easier time of it, but then again the grass is always greener. So for me the challenge is coming up with the ending, then I know where my character arc is and can write the whole thing.

3. Are there any occupational hazards of bring a novelist?

I'd say the hazard is not taking good care of your health as well as needing to find balance in all aspects of your life. Steven Barnes writes quite often about these issues. Writers tend to get depressed yet regular exercise and good diet can make a huge difference. Much to my horror I put on 30 lbs in the time since my first novel, Chasing the Trickster, was published. This year's goal is to put my health first so I can be around to write more books.

4. Is there anything you find particularly challenging in your writing?

Polishing material gets to be a trial because once I've written the story, I get bored. I've done what I've wanted to do, but the story still needs to be fleshed out with description, maybe some additional action, so that we don't wind up with sections that are just "talking heads" hovering around someplace indistinct.

5. Where did your love of books/storytelling/reading/writing/etc. come from?

I remember being read to as a very young girl. Then in first grade, our library teacher read to us from The Lion, The Witch and the Wardrobe. I was hooked. From then on I'd stare into space and make up stories, either original ones or ones based on tv, movies and books. In college, though I was a theatre major, I always made time to read novels and short stories and I wrote for the humor magazine.

6. If a two year old hands you a toy phone, do you answer it?

Of course. We need to keep our fantasy muscles exercised.

7. Where would your dream vacation be?

I'd like to go back to Europe to revisit St. Andrews (where I lived for 3 years), Paris, Aachen and Amsterdam.  Then maybe go around the globe with my husband. We'd use rail passes and stay at youth hostels to keep things on the cheap.

8. To what would you like to devote more time?

Creating peace of mind through meditation, yoga and all that spiritual stuff. Right now I take on-line art classes to relax. It's funny because my background is in theatre and I took up writing to relax as a quiet, non-stressful way of being creative. Once I became published, it was no longer a low-stress activity I was a business person. So now I paint, but I think doing meditation might be better since all these art supplies and canvases are costing a fortune and filling up my closets.

9. If you could dis-invent one thing what would it be?

Plastic. Considering what has happened to our oceans and the leaching of chemicals from land fills, dangerous chemicals are everywhere, even in our bodies and mother's milk Plastic may be the death of our planet and us along with it.

Dump it in the Hudson River. I live just a couple of blocks away and there's a very nice park and landing dock there. Of course one would have to disguise "the package" and go in the dark of night to an area not well lit or with surveillance cameras...it could work. 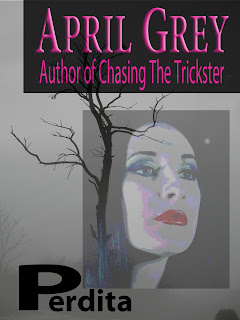 Fairy Tales can come true, it can happen to you...Run!

Out of work and down on her luck actress Cindy White's life changes -- and not for the better! -- when her roommate kicks her out. Once in new digs, an old Chelsea tenement, Cindy discovers a tunnel from the building's basement that leads to the land of Perdita, a place she'd thought her father had made up in the fairy tales he'd once told her. A dangerous, ruined place of fairies, demons and captives -- like her father, whom she thought was dead.

In this dark fantasy, a young woman discovers her true self and must align it with the old, abandoning the world she knows in an effort to free her father.

April Grey writes urban fantasy novels such as Chasing the Trickster and St. Nick's Favor. Perdita is her most recent novel with Return to Perdita to follow. Her short stories have been published in such print anthologies as Demonmind's Halloween 2010, The Best of Everyday Fiction 2, Northern Haunts, Ephemera, Love Hurts and Terrible Beauty, Fearful Symmetry. Her work also can be found in many of Rayne Hall's Ten Tales anthologies. Her collected short stories can be found in The Fairy Cake Bake Shoppe and I'll Love You Forever. She is the editor of the anthology Hell's Garden: Bad, Mad and Ghostly Gardeners.

She and her family live in Hell's Kitchen, NYC in a building next to a bedeviled garden. Gremlins, sprites or pixies, something mischievous, lurks therein. Someday she'll find out.
Find her work at author.to/aprilgrey. Also follow her at www.aprilgrey.blogspot. com, www.aprilgrey.com and .twitter @aprilgreynyc. Contact her at lorned@nyc.rr.com