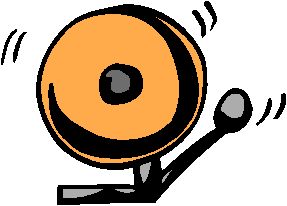 Ding Ding Ding. Its the battle of the centuries. Vampires against Werewolves.

In most fiction, these two opposite paranormal groups are bitter enemies and hate each other. Where the animosity stems from can be debated. So, lets debate 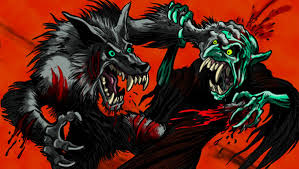 Some authors go for this simple version of things. Werewolves (especially the more mystical wolf appearance kind) tend to view themselves as a naturally occurring phenomenon along side the normal human evolution. They live, love, breed and die the same as humans, they just have this extra side to them putting them more in touch with nature. Fair enough. Then along come vampires. Creatures that are un-dead, who have had their human life and because of some virus/curse live on after death preying on humans to keep surviving. Making it a fight for survival.

There are others that look at the relationship between the two as they could get along if they wanted to but they just don't want to. There is bad blood between the two groups stemming from something that happened a long time ago and each new generation is taught to hold the same grudge. This has been anything from two brothers, one who became a vampire and one who became a werewolf falling out over some girl (and its always over some girl isn't it) or once upon a time vampire used werewolves as slaves. This version of events allows the writers to use things like peace agreements and unusual alliances to add drama to a story. 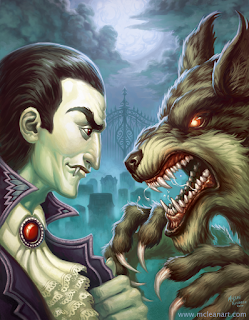 However, this hatred, whatever the reasons for it, is the easy way to put conflict into a supernatural novel. Just drop a girl between them and watch them go at it in an attempt to win her affections.

Now that is entirely dependent on what you read and choose to believe. In most I've come across, ultimately it tends to favour the werewolf coming out on top. You have numerous novels where all the werewolf has to do is bite a vampire and its a death sentence. Of course you also get the novels where a werewolf bites a vampire and all you get is one pissed off vampire with a bit of his arm missing. I have noticed though that Vampires tend to go for neck snapping quite often where as werewolves will attempt to rend their opponents, possibly for the fun of making them a canine chew toy. Either way its always thrilling to watch. 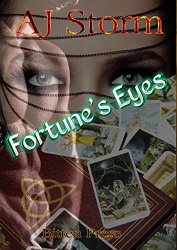 Leena Price had been born with a gift. A gift which offered her only scorn from her father. She would find this gift could be either a blessing or a huge burden. Doors would be opened into the brightest worlds or the darkest hells.
After years of living on the streets on her own, she’d find a safe haven with her aunt in New Orleans. However, New Orleans would prove to be dangerous for her. A serial killer roamed the streets of the French Quarter, and discovered this gifted woman. He kept his eyes focused on her, waiting and watching.
She’d become involved in the investigation and would her gift help Detective Roger Black find the killer or would it put her in harm’s way. Would karma bring Leena and Roger together, working it’s magic on them.

The killer was a surprise to me, because as I said, the romance element took over and they really didn't spend enough time on that character for the reader to pick up any clues. Also as a stand alone book it left quite a few unanswered questions. Who bought her the painting? And what was going on with her and the lawyer? I suppose they could be red herrings but if so they were very small ones that weren't satisfactorily resolved. 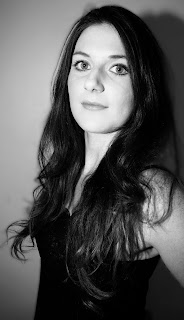 1. Tell me about your book Creeping Shadow (The Rise of Isaac, Book 1) and where you got your inspiration for it?

The Rise of Isaac series is a YA fantasy that follows the story of Oliver Knight who has to travel across the seven worlds to save his sister from a deadly curse. But a sinister enemy is on the rise who will stop at nothing to thwart him on his journey.

I got the idea for the series a few years ago. It wasn't a eureka moment but more that I made a decision to write a fantasy series then sat down and started brainstorming! I wanted the protagonist to go on a physical journey with a clear start and end point. So I came up with the idea for seven worlds which are divided by gateways.

2. How do you motivate yourself to keep writing?

I always have the motivation to write but I do have a problem with motivation to edit! The creative part is so much fun but the real work starts after I finish a first draft. I think the only thing that gets me through the editing process is loving the story so much that I know I'll never give up on it.

3. Ugly and live forever or attractive and die within a year?

Who would choose attractive and die within a year!? One year?? That's no time! I would definitely be ugly and live forever. Besides, forever is a long time to convince someone I've got a great personality.


4. If you could have personally witnessed anything, what would you have want to have seen?

I would love to go back in time and witness real life dinosaurs! I have had a massive (probably unhealthy) obsession with Jurassic Park since I was little and they still fascinate me. But I'm definitely bringing a 'high hide' with me!

5. What question do you hate to answer?

I'm a vegetarian so a question (or variation of this question) I always get asked is:

If you were on a desert island and the only thing you had to eat was chicken, would you do it?

And the questions usually progress to more and more ludicrous scenarios that are just trying to force me to say yes. Grrr!

6. What is your favourite word?

Dilapidated. Just say out loud slowly and you'll see why.

7. If you could spend the day with any character from fiction who would it be?

I would spend the day with Mo from Inkheart then he can read all my other favourite characters out of the books for me! Oops, I think I just became Capricorn...

8. What is the weirdest thing about you? Are you proud of it?

This weirdest thing about me is probably the fact that I give my pets their own voices...as in I speak out loud for them when I'm talking to them...

9. If you had to be trapped in a TV show for a month, what would it be?

This might sound crazy but...The Walking Dead. For two reasons! Firstly, I want to know how I would actually fare in a zombie apocalypse, and secondly, I'd have a chance at getting Daryl Dixon to fall in love with me...

10. What was the last book you read without skipping through anything?

I recently read The 5th Wave by Rick Yancey. I also saw the film not long after which I thought was a great adaptation. It's an aliens vs the world story and I'd definitely recommend it!

11. What is something you’ve always wanted to try but have been too scared to?

Dye my hair. Seriously, I've never done it! I'm always tempted to just be drastic and go blonde but I don't think I'll do it until I start going grey.

12. What house would you belong to in Game of Thrones? Be honest

I think I'd genuinely be a Stark. I've got the dark hair and a pet dog (not quite a wolf but hey) and I hate the Lannisters with a passion that just isn't natural.

13. If you had to give up one of your favourite things forever in exchange for a multimillion book deal, what would it be?

I think I could give up a lot of material things for it but nothing's worth the things that truly matter like family, friends, pets and your favourite pastimes! Otherwise, what's the point in living?
So I'd give up a combination of material things I love like chocolate, Mexican food, pizza, my bed, wine, and the most difficult of all...lip balm. Is that good enough for you Penguin Books?

I'd like to say a massive thank you for the interview Sonnet and good luck with your blog! 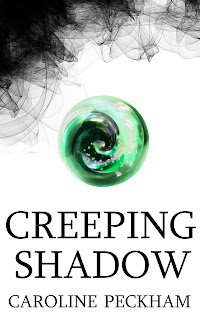 A man waits in Vale, a world void of humanity.

A mother vanishes, her disappearance concealed by the police.

And a boy linked to them all must fight to save his family.

Earth is just one of seven worlds. Gateways divide the realms and those who pass through must earn keys, participating in challenges that will separate the fearful from the brave, the weak from the strong, and the witless from the cunning.

Sixteen year old Oliver Knight knows nothing of the other worlds or his family’s dark past. But when his adopted sister succumbs to a deadly curse the truth is revealed and he is plunged into an unknown land in a desperate bid to save her. However, a sinister enemy is on the rise and the danger they face at every turn throws those around them under suspicion. In order to survive, Oliver must figure out who to trust, who to believe and, ultimately, who to fear…


She lives in the south east of London in a tiny, quintessentially English itown where you'll find an abundance of tea shops, pubs and rain. She has a BSc in Zoology from The University of Reading and, when not writing, still has a mind for science and googles every question that springs to mind. She adores animals, travelling to faraway places, and watching the latest films at the cinema.
Her first novel, Creeping Shadow, was released December 2015 and book two in the series is set for release February 2016.