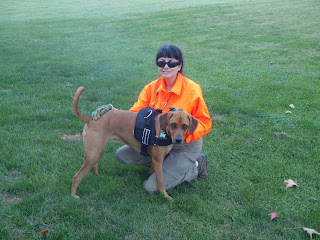 1. Tell me about your book Soul Search and where you got your inspiration for it?

Soul Search is a modern tale of the psychopomp. It was a "what if?" moment that inspired me to write the book. I am a K9 handler for search and rescue and we are frequently called out to find despondents. The story sometimes does not end happily for these people and rescues turned into a recoveries. Search dogs play a huge role in finding both the living and the dead and I wondered, what if a search dog could also be a therapy dog for the dead? What if a search dog was also a psychopomp, leading tormented souls who are trapped in this world to the afterlife? The "what if?" moment wouldn't let go until I wrote the story.

I learned a lot about the local history of Warren County New Jersey, from pre-Revolutionary settlements to life in the early 20th century. Stories from this history weave and meander through the plot of Soul Search. A major story element involves a 19th century home invasion that resulted in the brutal murder of nearly an entire family. The more I learned about this event, the more convinced I became that justice was never served. In fact, there was a subsequent miscarriage of justice that resulted in additional tragedy. While I cannot go back in time and make things right for the victims, I could write an ending to their stories that allows for a peaceful resolution to the horror that they endured.

It was a youthful indiscretion. I was once pulled over by an officer for speeding, but the start and the end of this story are pretty mundane. Stories of a more recent vintage involve sitting in the back of a patrol car and learning that you cannot simply let yourself out when the car comes to a stop. Law enforcement officers are frequent escorts during search and rescue missions, e.g. taking me to the subject’s home to obtain scent articles for our search dogs or following along during K9 tasks to explain to residents why we are entering their property. I have even been on searches where the police escorts were armed with assault rifles and worn Kevlar vests. Walking in front of these guys during a search while wearing a high visibility orange shirt was one of the more interesting events in my life.


4. You’ve just been kidnapped and the people from the last TV Show/Movie you watched have to save you. Who is it?

The cast of The Big Bang Theory would create a diversion using a mix of ordinary dish soap, hydrogen peroxide, and saturated potassium iodide to produce a large quantity of foam. While the kidnappers are distracted by the sudden possibility of death-by-foam, Leonard Hofstadter will blow the locked door off its hinges using a modified rocket fuel that had previously been used to disable an elevator. Leaving the deafened and confused kidnappers behind, we would all proceed to the Cheesecake Factory to indulge in a celebratory nosh.

5. How would you survive a Zombie apocalypse?

I have devoted an unconscionable amount of time to figuring out how to survive a Zombie apocalypse, so I’m delighted that you’ve asked this question. My first task would be to train my Plott Hound to recognize the scent of a zombie and to issue a full-throated alert if any approaches. Plott Hounds were bred to hunt bear and they are fearless protectors of their owners, so my hound would let no harm come to me. I would soon acquire a pack of Plotts and use them to hunt down zombies using various projectile tools that can be acquired from a Home Depot. I have spent many hours studying Jackie Chan’s approach to fighting and I have come to the very reasonable conclusion that almost anything can be used as a weapon. While the rest of the world hoards a limited supply of ammunition, I’ll be acquiring all manner of nails and spikes and other sharp things that can be shot at high speed from unlikely weaponized hardware.

6. Have you written any other books that are not published? Do you intend to publish them?

I am currently working on the sequel to Soul Search and hope to have it published by the summer of 2017. The next book is titled Soul Scent and opens during the aftermath of a suicide. At this time in the writing, Fia, Cam and Zackie are struggling to understand why a woman late in her pregnancy would take her own life and how to negotiate the crossing over of the spirits of the mother and the baby.

7. Do your characters seem to hijack the story or do you feel like you have the reigns of the story?

Cam Ramsey appeared on the page fully formed and ready to take over the story. Soul Search was meant to be Fia’s story. How does someone who was labelled as a psychotic child make her way in adult society, especially when her mind is actually sound, but the unseen world relentlessly invades every aspect of her life? When Cam showed up in the story, he spoke to me and said, “I have vast experience with this. Fia needs to do several things if she’s going to live. Give her to me and I’ll fix her.” I let him have his way at first, because Fia’s character was more tentative and so focused on survival that she was initially at odds with making the changes necessary to become fully alive. At one point, I decided I needed to break Cam’s leg to get him sidelined long enough for Fia to take charge. I settled for a broken arm, since the timing of the story events needed a mostly functional Cam to be available before the bones were properly healed.

8. Anything you would like to say to your readers and fans?

I am deeply grateful to everyone who has read Soul Search and would like to profusely thank those of you who have left reviews. I’d like to encourage readers to let me know what you think of the story, what appealed to you and where you wanted more. Contact with readers is the life’s blood of an author and gives us encouragement to keep going.

9. Do you have a day job in addition to being a writer? If so, what do you do during the day?

I currently spend my days writing, but in the recent past, I worked as a scientist in the pharmaceutical industry, trying to work out the genetics behind the why some people respond to certain drugs while others get little or no benefit. I have a Ph.D. in biology. I was the kid who couldn’t stop playing with the dry ice and, later in life, liquid nitrogen. The scientist in me strives to bring logical consistency and mechanistic detail when I write about the unseen world in Soul Search. I think this helps the reader to enter fully into the story.

I am also nationally certified in search and rescue as a SAR Tech II and I have shared mud with countless other canine handlers and ground pounders. When I’m not writing, I respond to callouts to find missing people. To counterbalance the fantasy elements of the story narrative in Soul Search, I drew from actual searches to bring rich details that enhance authenticity and anchor the story in reality.

Between these two approaches to suspending disbelief for the reader, I have been told that I’ve created a story that cannot be put down. For as long as the story lasts, you will live in that world.

10. What character in your book are you least likely to get along with?

The Psychopomp would definitely freak me out. While she takes on the aspect of a search dog and Cam claims she has a sense of humor, I wouldn’t know how to properly relate to such a creature. I am used to dogs who are affectionate and think well of humans. Normal interactions between dogs and humans also involve beings with limited lifespans, so we’re a little more forgiving of each other. Standing before an immortal being who has seen it all before would feel a little too revealing.

11. Is there anything I’ve left out that you’d like to talk about?

I would like readers to know that half of the author’s proceeds from this book will go to charity. Donations will be evenly split between the Search and Rescue Teams of Warren County and Wayward Plotts, a breed rescue organization. If you enjoyed reading Soul Search, please recommend the book to your friends and family to help raise money for these organizations. 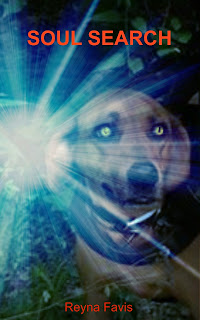 The spirits of the dead are like drowning people. They have no intent to do harm, but once they notice people like Fia, they latch on and in their panic and desperation, drag them under. Fia is a young woman in deep trouble, but the world thinks she owns the deluxe edition of crazy. To have any chance at a normal life, she needs a new start. Convinced that the woods are empty and safe, she signs on as a wilderness search and rescue volunteer. Bad assumption. Big mistake.

When Fia witnesses a psychopomp leading a dead boy through a portal to the afterlife, she is frantic to learn the secret of how to free herself from the dead. Can she overcome her necrophobia and serve the Guardian of the Dead?


REYNA FAVIS holds a Ph.D. in biology and exerts her power as mistress of the dark arts of introversion through her blog, Introvert Broadcasting Network. Her previous publishing history includes scholarly articles. When not writing, she responds to callouts as a canine handler for search and rescue. She lives in Warren County New Jersey with her husband, a search dog and a coterie of pets.