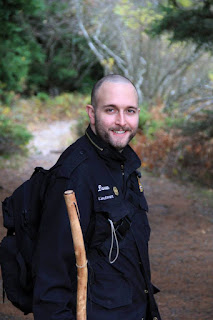 1. Tell me about your book The Engineer and where you got your inspiration for it?

The Engineer will be the first book in the Chronicles of Actaeon series. It follows Actaeon Rellios, who is an inventor, tinkerer and problem solver in the city of Redemption. Redemption is a ruined futuristic city populated by people with a medieval understanding of technology. Most of them are just trying to survive and eke out an existance. Actaeon is a different character in that he takes the time to both explore the mysteries of the city and also apply them to solve people's problems.

Actaeon was a character that I played on a text-based RPG that my wife created, and the story in The Engineer was also the story of how I met my wife!

The biggest thing I learned while writing this book was the importance of an outline. I had a very good idea of the storyline upfront, but there were a dozen or so different 'projects' that Actaeon works on during the book. In order to keep all of those various plot paths organized and progressing easily, I needed to implement a full outline, which was very helpful.

I re-read Nine Princes in Amber, the first book in the Amber Chronicles by Roger Zelazny this year to my son while he was in the womb. It had been more than a decade since I first read it, but I must say that it is one of the most well-written and influential books that I have ever written. I know that I will never be as tremendous of a writer, but I aspire to write more like that in my own work.

4. What was your most defining moment in life?

When I first met my wife. I went on a hike first where I hiked a 4,000 foot mountain. After I was done, I immediately drove 7.5 hours to meet her for the first time. It was truly an epic day and it changed my life forever.

5. In what ways do you hold yourself back?

Personally, I like to spread myself too thin. I try to do more than time allows and because of that I know I tend to get myself so busy that I can only do a mediocre job at everything. Thus, I try to limit myself and the things I commit to so that I'm not doing too much at a time. It is a task I still fail at frequently, though.

There are stories that have manifested in my mind since I was a child. I've written many of them down but never finished a book. It is something I've always wanted to do and this story is also one that is of personal importance to me.

What are the details behind the creative force behind the universe that we can perceive?

I've collaborated with my wife before we were married. She was the perfect writing partner for me and ended up being the perfect partner as well. We got about halfway through a science fiction novel that dealt with alternate dimensions on a colony world. I still hope that we will finish it and publish it one day.

9. Do you aim for a set amount of words/pages a day?

Tuesdays are my writing day. After I get home from work, see my family and eat dinner, I write for the rest of the night. Sometimes I get some extra writing sessions in as well. My goal is to get a scene done each time I sit down to write. I can go anywhere between 1k and 5k words in a sitting depending on how easily the writing flows. If I get a scene done, I like to brainstorm the next scene and write a scene opening if possible, so it goes more smoothly the next time I sit down.

Definitely! I've judged many books by their covers in the bookstore. Of course I typically read the back matter (and reviews if it is on Amazon). The first thing that draws me in is the cover art though. Good cover art should stir one's imagination and present a world that calls your name.

11. What part of your writing time do you dedicate to marketing your book?

A short portion of my writing time is dedicated to stirring interest in my book each week. I try not to let that get in the way of the most important part though: writing the book!

The characters that populate the world of Redemption mostly came from my imagination. There were a few exceptions where a character is inspired by a character from the text-based game – many of which became essential to Actaeon's story. There are also a few characters that I got permission to include from their players and so I do my best to stay true to their original personalities.

I'm an R&D Engineer for a technology company. My engineering background gives me a good foundation with which to decipher my main character's approach to problem solving. The patent writing that I've done also helps me to better describe the technical aspects of Actaeon's various creations.

In addition to my paid job, I also volunteer as a Fire Captain in my local fire department. This keeps me even busier, but also serves as inspiration since I meet a lot of different characters and encounter many different situations, strange, funny, difficult and rewarding, in real life doing emergency services.

There is a cult leader named Phyrius in my book. He's a bit of a madman and when I write him, I feel like I start to go a bit crazy myself when I step inside that character's mind. He isn't really a guy I'd want to spend any time with, but he creates some humorous scenes in the book so it is worth having him about in a limited capacity.

15. When do you expect The Engineer to be available?

I have nine chapters left in a forty chapter outline and I plan to publish in 2017. Follow my Facebook page and I will keep you up to date with my progress! 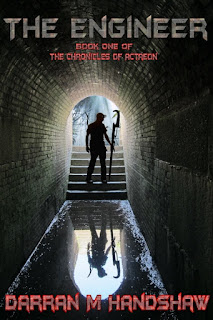 The Engineer is the first anticipated novel in a series by Darran M Handshaw. It follows the story of Engineer Actaeon Rellios in the ruined futuristic city of Redemption, a shattered remnant of the advanced people known only as the Ancients, strewn with dangerous technology, strange creatures, and unforgiving terrain.

For the people who live in the ruined city, survival is paramount - politics, war and sustenance rule the minds of most there. But for Actaeon, an inquisitive mind and an endless quest for truth guide him. But will these qualities lead him to discover the ultimate truths of the city, or will they drive him to the same ruin as the Ancients?


Darran M Handshaw is the new writer of the Chronicles of Actaeon series.  In addition to his writing, he works as an R&D Engineer where he has more than ten patents to his name.  He also serves as a Volunteer Fire Captain in his local fire department.  He lives on Long Island, NY with his wife and son.