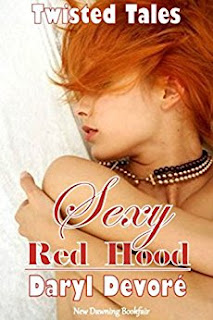 “Go save your Grandmother.” With those words, Red Hood races off to the Emerald Forest cruise ship to rescue her grandmother - and her inheritance - from a gigolo. An emerald necklace, woodsman, wolf and a night with liquid chocolate and whipping cream all make for one memorable cruise.

A lot of the time with modern retelling of fairy tales, you have to wonder how they are going to pull it off. People don't just live in the middle of the woods or lie down in death sleeps in glass coffins anymore. With this story however I did not see a cruise ship coming. Its at sea which is the total opposite to land but check it cheeky name - Emerald Forest. So rather than off to Grandma's cottage, Red was off to grandmothers Cabin. The author also did an old switcheroo in this book that I liked but I've seen it done a lot before.

I was disappointed with the love scenes, most of which were portrayed as the dreams of the protagonist. Which was a total let down. The protagonist - nicknamed Red (though I am still a little confused at how she got that nickname but it was necessary to make this story tie back to the original fairy tale so never mind) was not the best portrayal of this fairy tail trope that I've seen but by far not the worse.

This books biggest redeeming quality was actually the grandmother and her friends - a saucy wicked group of Golden Girls who were out for a good time and a laugh. 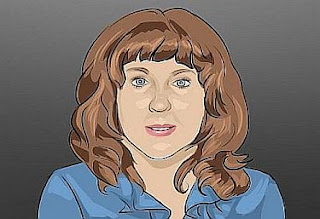 1. What is the longest you’ve gone without writing?

The longest time I went without writing was about 30 years.  Writing just took a back seat to working long hours at my “day job” and raising a family.  I started writing many stories in the 70’s and 80’s but never finished one until about five years ago.  I was able to do that during a downturn in the oil industry when I had a lot of free time on my hands. I’ve been hooked ever since.

2. Mountains or the beach?

I have to say beach since my favorite place to write is at my lake house.  I spend a lot of time gazing out the window at the beach at the end of my yard.  There’s always some wild life activity there from majestic gray herons fishing for their next meal to little yellow ducklings swimming back and forth in and out of my view.

3. You’ve just been kidnapped and the people from the last TV Show/Movie you watched have to save you. Who is it?

LOL Well, I guess that would be Dorothy from the Emerald City television show.  She seems to be much more powerful than the original from the Wizard of Oz story by Frank Baum.

4. If you had to choose to live without one of your five senses, which would you give up and why?

Hmmm, what an interesting question.  Well, I need my sight because I love to fill my eyes with beautiful imagery.  Losing my hearing would be devastating because I love music or anything even remotely musical sounding such as water lapping against a shore or wind whispering through the tree leaves.  Touch – no gotta have it.  I find myself reaching out and touching nearly everything that I pass by.  Smell – how it brings back memories – no, I would miss it too much.  So, that leaves taste, which is a hard one to imagine being without but I’ve come to a point in my life where I’m eating more to live rather than living to eat so I think I could very reluctantly let that one go.

5. What motivates you to succeed as a writer?

We live in the most amazing time.  Before the internet, there was almost zero possibility for most people to become a known, successful author.  Now, with self-publishing available to everyone, each of us (and there are very many aspiring writers today) has the opportunity to achieve some measure of success in their own little sphere of influence.  At this point, just the fact that strangers might pick up my book, read it and enjoy it makes me feel satisfied and successful.

Oh!  Definitely a new planet and of course it would be Unimaise, which means beautiful one.  Why?  Because that’s where the tribe of magical, metal-horned unicorns come from.

What happens after death? I wish I knew.  I address that somewhat in the story.  Of course, it is a fantasy so I could make after-death be anything I envisioned.

Fantasy is my favorite genre.  I love magic and world building and the idea of intelligent beasts who don’t need interaction with humans order to live full lives. The first fantasy book that I devoured was Lord of the Rings.  It really opened up my imagination.

Not on purpose!  But that’s what happened with “The Blue Unicorn’s Journey To Osm”.  First, it languished for 30 something years and then after I started re-writing it, it has spent weeks at a time  just simmering in my brain.  It seems like there’s always some new thought or idea that wants to present itself to me.  I thought I would have the novel version of this book finished by now but I’ve decided to take my time and let it finish itself at the pace that it desires.

10. Do your characters seem to hijack the story or do you feel like you have the reigns of the story?

The characters have definitely hijacked this story.  Some are now main characters but when I first brought them into the story, they barely even had a speaking role.  One thing I’ve realized is that everyone wants to be the main character and they all vie with each other for that role!  LOL 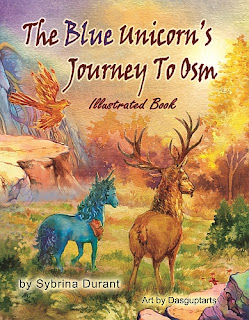 Blue was the last metal-horned unicorn born. Problem is–he doesn’t have a metal horn. And the prophesy slated him to save his tribe. Everyone knows no metal means no magic! He is going to have to use his wits and good old common sense to achieve this lofty goal. Blue has no intention of letting his tribe down.  He will do whatever it takes to save the tribe.

Sybrina Durant is the author of several picture books for kids and teens. Some are educational, like “Learn To Tie A Tie With The Rabbit And The Fox” and “1,2,3 Count With Me”. On the other hand, “Yarashell Abbily and Her Very Messy Room” is purely playful with its light-hearted sing-song text. Speaking of songs, Sybrina is a song-writer so all of her books feature songs. You can hear them at her youtube channel – sybrinad.