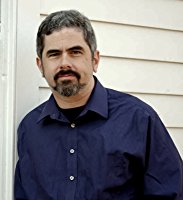 1. Tell me about your book Dragon’s Ark and where you got your inspiration for it?

The first bit of the back cover makes for a good start: Geologists warned it was inevitable that an earthquake would collapse the Three Gorges Dam. When it finally did, a wall of water six hundred feet high rushed down the Yangtze River, destroying other dams as it went.

Fifteen million Chinese will die in the worst natural disaster in human history. This is what people are told. It is a lie.

That’s how I start the second book in my cyber-thriller series, Gemini Gambit: a massive natural disaster that really isn’t. I’d been reading about China for about three years at that point, inspired by the Beijing Olympics. The China I saw there was emphatically not the China I had grown up watching on the evening news in the ‘70s and ‘80s. It was fascinating, vibrant, and growing at an astounding rate. When I realized there wasn’t a science fiction book (that I knew of) set there, ideas started jumping out at me. I plotted the book out in about six weeks, and finished the first draft in a few months.

The Gemini Gambit series itself is set twenty years in the future. An elite hacker, ‘Angel Rage’ – whose real name is Kim Trayne, has retired, but when Mike Sellars tracks her down in the middle of the Warhawk FPS World Tournament, curiosity gets the better of her. Who was the strange guy who blasted past all her cyber defences, exposing her to the criminal world, and law enforcement, she’d tried so hard to hide from? It’s a rollicking rollercoaster of action, humour, and romance, a series of summer novels that uses the future to comment on the present.

Writing the second novel of the series was a lot harder than I expected. The first time around I could do anything, but now I was limited. The first book was full of great ideas, action, and jokes, and I couldn’t use any of them again. That took some getting used to. I also found it very hard to get them into trouble again. They’d just gotten out of their first mess!

I always “cast” the characters in the books I read, and my own was no exception. I started writing the first book in 2010 and mulled over the actresses I knew who played smart but tired, tough but vulnerable. Michelle Dockery’s performance in Hogfather immediately jumped to mind, and the association stuck. It made watching Downton Abbey, which premiered the next year, a little surreal.

Never for anything major, but I have seen my fair share of traffic courts.

5. What is the longest you’ve gone without writing?

6. Mountains or the beach?

Hotel room. I switched jobs a few years ago, just in time to go on their bi-annual retreat to a resort in Cancun. My wife was outraged… outraged… that I never set foot in the surf, and only went to the beach to change the scenery. I was too busy writing the first draft of the third novel in this series.

7. You’ve just been kidnapped and the people from the last TV Show/Movie you watched have to save you. Who is it?

The peloton of the Tour de France. 189 cyclists, their support teams, and an entire TV broadcast crew. I think I like my chances, as long as there’s a mountain road somewhere nearby.

8. How would you survive a Zombie apocalypse?

Lift the entire playbook from John Ringo’s Dark Tide Rising series. It’s the smartest take on the ZA I have ever seen. First thing: Don’t try to build a fortress. Buy a boat and head out to sea. Zombies don’t swim!

Science fiction, but not for the tech. I deeply admire authors like Ursula K. Le Guin and Octavia E. Butler because they use SF to examine the human condition in ways that aren’t otherwise possible. Call it the Star Trek school: yes, there’s ships and transporters and phasers, but at the end of the day I’m really trying to figure out what makes humanity tick.

10. What has your experience been like as a new Indie Author? Bruises, Highlights, and lessons?

It’s really hard to do this right, and you can’t learn it by studying books. It’s something that’s taught person to person. Good editors are a requirement but they aren’t nice when they critique your work. They shouldn’t be, not if they’re doing their job right. It’s deeply rewarding to know that the characters who’ve been living in my head all this time now live in the heads, and the hearts, of other people, most of whom are strangers.

They don’t hijack it as much as short-circuit it. There are two times, one in each book, where my main character made a decision which destroyed the carefully laid mousetrap I’d set out to catch her in. The rest of the cast (it’s an ensemble piece) are equally able to figure out solutions I hadn’t thought of when I first imagined the scene. That’s a problem with having characters smarter than I am: It takes me hours to figure out the problems they take minutes to solve.

12. Do you have a day job in addition to being a writer? If so, what do you do during the day?

The saying is “write what you know,” and that’s what I did. I’m a software developer by day, and have been involved professionally with IT my whole adult life. 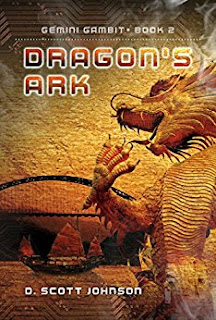 Geologists warned it was inevitable that an earthquake would collapse the Three Gorges Dam. When it finally did, a wall of water six hundred feet high rushed down the Yangtze River, destroying other dams as it went. Fifteen million Chinese died in the worst natural disaster in human history.

This is what people are told. It is a lie.

Kimberly Trayne has no time for the past. She’s a free woman now. There are family reunions to avoid, realm championships to win, and an AI-human hybrid in her life. Or not. It’s complicated.

What she needs most of all is a vacation. Kim’s heard about those; they sound nice. When Mike mentions he has family—of a sort—in China, she even has a destination.

Secrets people will kill to keep.

Stuff happens, they say. Even after flying halfway around the world, it still keeps happening to her.


D. Scott Johnson has been an IT professional since 1988, and currently works as a software developer. Aside from writing, he also mucks around with the ridiculous world of hi-fi audio, and just barely keeps his two classic Alfa Romeos on the road. He lives in Northern Virginia with his wife, daughter, and however many pets they have managed to sneak in to the house at any one time.

https://www.facebook.com/DScottJohnsonGambit
Posted by Sonnet O'Dell at 07:00