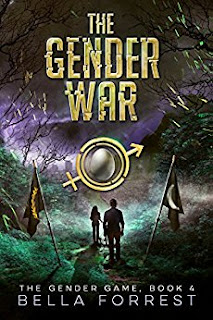 "For the sake of Viggo, my brother, my family in Patrus, and every single citizen of our God-forsaken nations, I had to stop the war."

The fourth book in this series returns to form, with a lot of action, things driving the story forward. Violet and Viggo are thrown deeper into the fray as Matrus, spouting as much propaganda as possible, is slowly taking out the other side in the conflict without them even realizing it. Together with their own, new, band of renegades they are determined to stop Matrus from their plans.

I enjoyed this book more than the last one. The pace was much quicker and there weren't large parts of the story where I was wondering why it was important. It was also good to see some characters that I disliked getting their comeuppance as they fell to the hands of the heroes of this tale. There are lots of moments where you wonder how Violet is going to get out of things and I am never disappointed in her innovated thinking, also her strong tireless desire to help those around her.

This book like all the others before it ends with a cliff hanger, insuring that if you are invested in the characters that you will purchase the next book to find out what happens. This is a very clever way of plotting a series, ensuring that if you intend to write it for the long haul, that sales will continue to come in. However, after the book before this, where the pace dropped and my interest was barely kept, it also proves that each book must be worth the readers attention. You cannot write a book that is just filling in a gap between two action packed installments, cliff hanger ending or not. 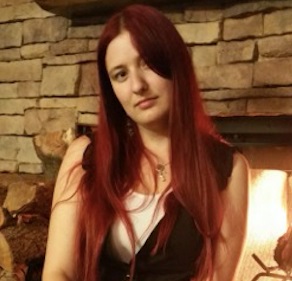 1. Tell me about your book, Deity’s Soulmate, and where you got your inspiration for it?

I would like to think that Deity's Soulmate has a uniquely modern twist on mythological aspects. I was going for something new - a mix of Greek and Roman gods, creation, and dragons. Of course, mixed with a bit of romance and adventure. It’s about a young goddess named Gardenia, who does something stupid that earns her a punishment from Zeus and ultimately leads her in finding dragons. Along the way, she learns about herself and her place in the universe.

Inspiration? I had been fascinated with Greek and Roman mythology since a young age and decided that it was high time that I told a story about it from my point of view.

I learned that I have bias towards the types of characters that I create. My best friend told me that 90% of my dragons are male and I need to add a female or two for book 2. She even sent me a dragon figurine saying that’s how my next female dragon should look like. I think she even knows how that dragon should act like…

3. What are the top three books in you TBR pile?

4. Have you ever danced in the rain?

Yes! I love rain and I’m no stranger to dancing.

5. You’ve just been kidnapped and the people from the last TV Show/Movie you watched have to save you. Who is it?

Adrian Monk from Monk. I guess that it was a good thing that that’s the last show that I saw because he could save me.

7. If you could live in a book, TV show or Movie, what would it be?

This one is difficult. There are a lot of choices to choose from. One of my favorite book series is The Banned and The Banished Books by James Clemens. I think that it would be an adventure living in those books.

8. What motivates you to succeed as a writer?

My readers. Whenever I receive any type of feedback or review, it makes me want to continue telling my stories that I cook up.

I have wrote a total of three books that are in draft form. Currently, one of them is on the last draft and in two months will be given to beta readers. So one out of three will be published this year, fingers crossed! It’s a paranormal crime fiction.

10. Anything you would like to say to your readers and fans?

Thank you for taking a chance on indie authors like myself. Your reviews matter the world to me. I smile, giggle, and cry when I read them. I’m always happy to talk and get to know you!

11. Are your characters based off real people or did they all come entirely from your imagination?

Imagination, though some traits are taken from people surrounding me.

A sheltered schoolchild in a realm of condescending gods and goddesses, Gardenia goes to Earth on a dare to witness the unsavory side of mankind for herself. Believing she can do better, she undertakes the formation of an entire galaxy, but without permission from Zeus.

Zeus disciplines her by assigning an epic 13-fold creational lesson destined to take her a century to complete. But he is taken aback once more when she makes an odd choice. She vows to fulfill this knowledge quest by tracking down a lost race of dragons, and discovering the secrets they’ve kept since time began.

Searching the universe to meet even one dragon may be a fool’s errand, but that’s the least of her worries. For ancient wartime resentments linger between the nations of dragons and deities, and some dragons would attack Gardenia on sight!

Yet she ventures out undaunted, learning unexpected things about nomadic life, tender love, and mortal peril along the way. The biggest surprise of all, though, goes by the name of Ri. Ri may be the man of her dreams, the voice in her head, the dragon she’s seeking, or all these things and more...

Meanwhile, the Fates brew sordid plans of their own and Hera jealously sets traps and trials for Gardenia at every chance. What’s a young goddess to do? Flight or fight?

Angelina Kerner is a self-published author of paranormal and lighthearted romance. She’s the wife of a photographer/physicist, and the mother of a cute little toddler, but she’s also been a dancer, a psychologist, an anthropologist, a geographer, a dreamer, and an adventurer. She does her best writing while being bothered by her cats, taking care of her son, in dressing rooms while waiting for family to try on clothing, and at home in sunny California. Angelina loves to play goddess-dragon matchmaker, transporting readers to a place where young goddesses have lovable flaws, the Fates plan to dethrone, the universe is endless and untamed, and dragons roam free! She also loves to write carefree romance where one can finish reading with a smile.