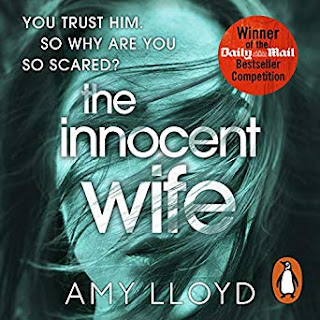 Twenty years ago Dennis Danson was arrested and imprisoned for the brutal murder of a young girl in Florida's Red River County. Now he's the subject of a true-crime documentary that's whipping up a frenzy online to uncover the truth and free a man who has been wrongly convicted.
A thousand miles away in England, Samantha is obsessed with Dennis' case. She exchanges letters with him and is quickly won over by his apparent charm and kindness to her. Soon she has left her old life behind to marry him and campaign for his release.
But when the campaign is successful and Dennis is freed, Sam begins to discover new details that suggest he may not be quite so innocent after all....

Let me start of by saying that iTunes was having an Easter Sale on selected audiobooks and I did not pay normal price for this. I got it for £3.99 thinking, hey if it's bad at least I haven't spent nearly twenty quid. I've never heard of Amy Lloyd and I don't watch Richard & Judy's book picks or read the Daily Mail, both of which recommended this book but both which I suspect were paid by the publisher to do so.

I'll start with some of the good points. It had a good premise. I like the characterization (even though I think the narrator did a very stereotypical British BBC voice for Sam) and I did overall enjoy the story.

But here is the bad. Its a very slow. Classed as a thriller but thrilling it ain't. I was more than half way through the story and was still waiting for it to start. It seems to all come at once, at the end, and if I am honest with you that ending is fairly anti-climatic. I also found after a while that Sam got on my nerves. She was so desperate for Dennis's love and attention that she was willing to put up with the crappy way he treated her - ignoring her constantly. You really start to question why he married her - which he does explain in the end and it's a really shitty reason.

Another thing I did not like, and this isn't really to do with the story but the manufacturing, is that the last fifteen minutes of the audio is a preview of another audio book by the same writer. Now I hate when they do this in Kindle and Print books, but audio was the one place I hadn't seen it happening, that it looks like is coming to an end.