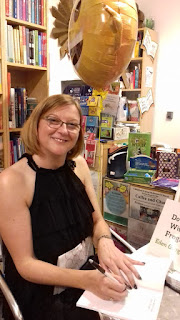 1. Tell me about your book, Down With Frogs, and where you got your inspiration for it?

Down With Frogs is a collection of humorous, candid, occasionally tragic stories about the modern romantic relationship; being with someone, ending it, and the aftermath; each story is told by a different female narrator. The inspiration definitely came from my own experiences, and hearing all my friends talking about dating; finding the right person is actually pretty hard for a lot of people.

If you want to write a book then you can. With the advent of self-publishing and POD there is no reason to sit around saying I wish that I could; Just pick up a pen or your Dictaphone, or open your laptop and get started! and ignore anyone who tries to say you cannot do it. Just get a good editor.

Driving on the motorway with my dogs the car couldn’t accelerate, stopping singing and turning the radio off I heard an awful dragging noise. As the next junction was coming up it made sense to me to go off there, turn around and go up the motorway to my friend’s house where I had just come from. But just after getting back on the north bound carriage way the police pulled me over.

The officer approached my window and the dogs went ballistic, my little car was rocking with them throwing themselves around looking fierce. He signalled for me to get out the car, but on the side of the road the roar of the motorway drowned out our voices; he told me to get into the police car. There was another officer sitting up front who asked me to pass him his packed lunch, they were lovely, and very sympathetic to my car troubles. And the whole experience was quite exciting really, although I suspect if there was another reason for my being locked in the back of the patrol car it would have felt very different.

Being brought a cup of tea in bed in the morning, looking into my dogs face, sitting under trees on a warm day watching the sky.

5. If you could bring one musician back from the dead, who would it be and why?

Freddie Mercury the talented, amazing and effervescent Queen front man, because it would be incredible to listen to him sing live, and to give him the chance to see how things have changed for the better for the LGBTQIA community since he died.

Why? I think that covers everything.

Definitely, books might be chosen ultimately on based on an interesting blurb, but a terrible cover would put most people off, however what makes it terrible is quite subjective. I am attracted to bright modern clean covers which is one of the reasons I changed the cover of Down With Frogs for the second edition.

I am about halfway through my next book ‘Laughing at myself’ a collection of short stories about not taking yourself too seriously, I need to get super focused so that will hopefully be out later this year (thanks in advance to my editor, I know she will do a great job).

There are also the bones of the next three books sitting patiently in my laptop, I just don’t know quite yet which order they will develop in. The research for an idea has become really fascinating, but I cannot say anymore about that just now. My aim to is keep publishing for as long as I have ideas and until I physically cannot publish anymore!

10. What is the toughest criticism given to you as an author?

After my first blog post ‘Day out at the STI clinic’ I sent the link to all my friends, a few weeks later I bumped into one of them, and she said “Oh my God, what was that rubbish you sent me the other day? Please don’t send me anything like that again!” I thought it was hilarious, but didn’t say that it was my work, because I thought she would be mortified.

11. Anything you would like to say to your readers and fans?

Yes, thank you for your feedback and support, it always helps to know what people enjoyed – and what they didn’t. And it is a real boost to hear someone has recommended Down With Frogs to a friend.

Some of my characters have grown from the grain of a real person, from a combination of real people or someone else’s character. But then my imagination has carried them somewhere different, to make them someone else. 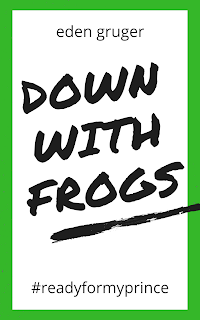 Down With Frogs #readyformyprince by Eden Gruger

Eden Gruger writes women’s stories in the way they might speak to their closest girlfriends.

This collection of witty, sometimes tragic, always candid short stories share the highs and lows, of finding, being in, and ending relationships.

Eden Gruger is a young at heart middle aged woman. She lives in London with 2 cats, 2 dogs, 1 husband and no children.