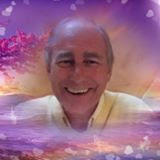 1. What is the longest you’ve gone without writing?

On a well-needed holiday to the beautiful island of Crete, I was initially surprised with the Wi-Fi speed. Slower than a snail at times my hands often caressed my trusty lap-top. You see, my brain was telling me to be the first person to launch one into space. But when I thought about the problem my frustration ebbed away. The huge number of tourists, all using their social media at the same time, were overpowering the system. Thus for one whole week, I hardly typed a word, but I did enjoy sitting on a beautiful sandy beach. The recuperative powers of the ocean were an added bonus.

2. Which do you use more often, dictionary or thesaurus?

I use both, but a thick thesaurus the size of an encyclopaedia is perfect for all the words I would normally miss. And the Emotion Thesaurus is even better. Where would I be without them both?

3. What was your most defining moment in life?

This is the easiest question on here. I met the lady who would become my wife, my career and my soul mate. Not long after we wed, my beautiful lady told me a story. On the day we first met, she spoke to her parents. Telling them she’d just met the man she was going to marry seemed naïve to them. Being a believer in fate, she waited. It took nine long years before we were wed. Now my soul-mate, my best friend, my gorgeous nurse and carer, she is the love of my life.

4. If you could time travel, would you go to the past or the future?

Travelling to the future would seem apt, but I think I’d be disappointed. That’s if the world we know today would still exist in one hundred years. Could it still support life? Now, that would be the big question.

I’d rather go back to the time of the Greek Gods. The time of the Spartans, the battle at Thermopylae, Hector and the fall of Troy, the list goes on and on. But there is one thing I’d like to see more than any other. My father fought in WW2. He fought, and was wounded, at Dunkirk. After he recovered, my dad travelled the world as a Royal artillery gunner on merchant ships. Sadly, he ended his army service in Burma, fighting the Japanese. Whilst he told many tales of all his journeys, he refused to say anything about his experiences in Burma. It was his way of forgetting the atrocities made on men, women and children, yes that’s right, children.

I’ve just finished reading a book about Burma. It was written by a Scottish soldier captured by the Japanese. Miraculously, he survived the beatings and the starvation. Eventually he met one of the men who had regularly beat him and forgave him.

I read the following. ‘Not being able to talk to others about what had happened was a common affliction among those who returned from Burma.’

Now, I understand a bit more about my dad’s feelings but I’d want to go back in time and see for myself.

5. What motivates you to succeed as a writer?

I love to write. I love it when folk say, ‘I loved your book.’ I love the great fun at my local writing group. We support each other - critique not criticism - suggestions not orders – their talent is amazing. Without their help over the years, my motivation would have ebbed away some time ago.

6. If you could bring one fictional character to life, who would it be and why?

It would have to be one of the main protagonists in Evil Never Dies and Heroes Never Fade. Grona, anagram of Groan, is deadly with a sword, hates almost everyone including his son, Tarn and loves his ale. His small band of men would follow him anywhere as he never follows the rules. Yet, as the second book unfolded I wanted to see him in a different way. A hard man with a soft spot? Reconciliation with his son? The reader will see the subtle changes but the last few paragraphs will determine whether he has changed. If he somehow came to life, I’d probably run a mile

My passion is medieval fantasy due to the works of J.R.R. Tolkien and David Gemmell. Both were masters of their craft and I try hard to follow in their footsteps. Researching takes up so much time but is well worth it especially when my work has been compared to David Gemmell on Zon.

But, I also write short stories in any genre I fancy. Now that’s down to the homework we are set in my writing group. I love writing about whatever comes up. My tales have been published in Scribble Magazine, The Portsmouth News and The Chania Post. Thank you folks.

No, but, yes. It wasn’t one author, there were four of us. We wrote Happy Halloween in 2014. I was lucky as one guy had to drop out and I was invited to take his place. Having never published anything before then, they took a great chance with me and I was determined not to let them down. Happy Halloween was a naughty book, but nice. We each offered a character, decided on 200 words for every turn, and the first person set the scene. Passing it along to the next writer and everyone else took time but eventually, it worked. We had a short story. It was published and all the money went to charity. Fantastic fun!

I do. If I see a poor cover, I think the writing will be the same. The chances are, it won’t be a bad book, but I was taught well. I was told to ensure my books were carefully edited, my presentation had to be good and the cover should entice the readers before they open a page.

I wish I knew. My marketing skills are really poor. I know it’s so important but I’m a bit slow these days at remembering what other authors have told me about. Amazon is a way to self-publish and thus market, but their huge take leaves the writer with peanuts. I never expected to make loads of money but I’d like a fair slice of the cake. Any and all ideas are warmly welcomed.

11. What are your thoughts on good/bad reviews?

It goes with the territory. As I was told from the beginning, ‘Rick, you can’t please everyone.’ And that’s correct. I think you have to have a bit of a hard skin but as long as the reviewer makes valid points, that’s fine. It’s never happened to me but anyone savagely denigrating an author’s work, should be … I’ll leave you to guess my chosen word.

12. Do you think giving away books for free works and why?

Are writers that daft? Well, yes they are. You spend months writing your story, many weeks editing, and much time promoting. Why anyone would decide to give away free books is beyond me. A year or so ago, I read an extremely well written and researched article about free books. The survey was damning. The vast majority of free books are never read. They sit on a Kindle and are subsequently replaced with other free books – books that are also unlikely to be read.

However, there is an exception. If you want folk to buy your latest book and tempt them with a freebie, that’s good marketing if it works.

13. What has your experience been like as a new Indie Author? Bruises, Highlights, and lessons?

People can be kind and cruel. I’ve obtained a hard skin but to be honest, I haven’t had any abuse, really difficult situations or dubious people trying to rip me off. Okay! Maybe a couple of devious people did try it on but overall, my journey has been very enlightening. For someone as old as me, I’ve surprised myself. And I’m still learning. I’m 100% certain my new book, Outcast, is worthy to please fans of Medieval Fantasy. And all I have to do is learn how to promote my books. Sounds easy, doesn’t it?

14. Do your characters seem to hijack the story or do you feel like you have the reigns of the story?

Never the characters and sometimes not me. I know that sounds a bit dopey yet it’s true. I draw maps which grow as my tale develops. My mind wanders unashamedly across my new world in the making. Because I’ve finished my homework - thank you teacher - I know where farmhouses would be built in the mountains and how far a horse would carry a man along high trails. As my characters evolve in my head I see their futures slowly develop. Bit by bit, the plot emerges and off my mind goes.

15. Are your characters based off real people or did they all come entirely from your imagination?

I did try once to base a character on someone I knew but quickly realised I didn’t know all of his secrets; not that it’s any of my business. Apart from that one try, everything comes from inside my, often, over-imaginative brain. I think I’m lucky to have such a feeling for my new lands, the people, the warriors, and the animals. In my latest book, ladies, strong willed ladies take a more prominent role. I wanted them to be female and tough. In my world, loosely based in the 11th to the 13th century in England, ladies were followers and fighters. They were an essential part of the armies. To make it right, I needed help and my lady editor did me proud. 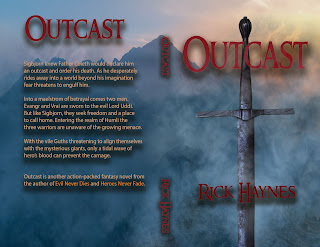 OUTCAST – a fantasy tale of love, betrayal, and giants.

The freedom of youth quickly disappears as a maelstrom of evil erupts. Torn between blind loyalty to his evil master and freedom, Sigbjorn chooses to escape from the clutches of Lord Uddi. With his two sword shields following, Sigbjorn leads them to Humli, a small peaceful town in the hills. Their hopes of finding a place to call home are soon dashed as a shadow grows in the east. With the vile Guths threatening to align themselves with the mysterious giants, only a tidal wave of hero’s blood can prevent the carnage.
BUY

Rick Haynes award-winning Drabblist. His passion is epic fantasy but he also write short stories and Drabbles in many different genres.