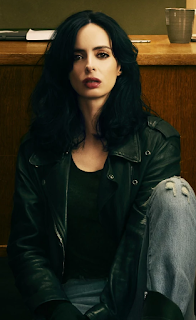 Season three for me was just a bit of a let down. I know Netflix were rounding off where they could as they've lost these shows to Disney in the house of mouses more recent expansion but it doesn't mean that they couldn't have done more with what they had left.

Don't get me wrong, I think Krysten Ritter is a brilliant Jessica and I have no problem with her acting, I just wish the writing was better. I have not enjoyed either season two or season three as much as I enjoyed the first season. There were plenty of ups and downs, certainly a lot of drama, and a bad guy that I think was designed to be hated if for nothing more than he was a snooty pretentious *beep*.

As with other series, you jump around a little, looking at what is going on with other characters such as Hogarth, Malcolm, and Trish...and that last one is what really let me down this series.

Anyone who has talked to me at all about Jessica Jones knows how much I do not like Trish. I think she's is a self righteous, attention seeking, drama queen who has always wanted what happened to Jessica ( getting powers not the tragic death of her family) because she believes that she would use such powers the right way. Season 3 focuses heavily on Trish in parts as she becomes a powered up vigilante - in one episode alerting the papers to her existence in an "anonymous tip off" then posing dramatically so that they get a good picture of her.

This to me shouts at Trish's true desire for super powers, not because she wanted to help people, you could do that without splashing yourself all over the paper, but for a want to be special - to be admired. Her vigilante good deeds were not enough if nobody knew she was doing them. She is much in the same vein as Iron Man was at first - she would have held a press conference and announced it if she could. It was all about her and she didn't think how dangerous it was, not just for her, but for those connected to her. Something that hits home hard after the murder of her mother by the serial killer that both she and Jessica have been provoking.

There were a couple of cameo's from previous characters that I saw this season and sort of hoped it would start leading the narrative closer to the comics in terms of relationship development but both were pretty short lived - almost a token gesture with no real intent to take it further.

The final scene in the season was the most confusing, there Jessica is, about to leave New York and start a new life somewhere else when who's voice convinces her to stay - none other than Kilgrave's. It was like a kick in the ass for those of us who were fans but know there isn't going to be another season - or if there is, not for a very long time and probably only available by taking out yet another streaming subscription. 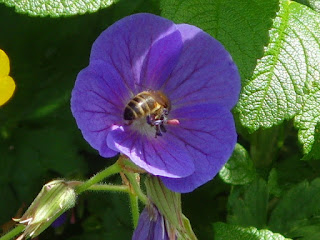 1. Tell me about your book, The Light Beyond the Storm Chronicles, and where you got your inspiration for it?
It’s a dark fantasy novel, with erotica elements (basically sexy scenes), set in a world where magic is outlawed, and elves live as slaves to the human overlords. Magic may be illegal but that doesn’t mean there aren’t any users of magic – magic manifests in many ways. There are sorcerers, adepts, magical creatures, healers but they have to be very careful and discrete in the use of their ‘gift; lest the ruling and tyrannical Order of Witch-Hunters find out. It’s a very divided society, with a lot of inequality, a lot of hatred and fear – that’s one of the many weapons the Order use to subjugate the masses. Divide and rule.

It’s not all darkness – although there is a lot of it, and violence too. There are love, courage, hope, and determination.

The first book in the series came out of another project – a half written adventure for a role-play game I used to play. We stopped playing and I decided to adapt the idea to a world I’d been toying with for a while. The other books in the series stemmed from that.

Marketing and selling books = steep learning curve! As an indie author you have to learn to be a salesperson, social media guru, and preferably and editor, cover designer, formatter etc. Unless you have a good budget.

I research quite a bit – flora and fauna of swampy areas, herblore, medieval weaponry, human nature… And, of course, there is the actual craft of writing. What makes a good story? Too many words? Too few? Dreaded adverbs…I’ve done a creative writing course, plus currently I’m doing an editing course, and I’ve just edited an anthology for a small press.

Mountains. I prefer the solitude. Mountains are one of nature’s many masterpieces – ancient, dangerous, beautiful and not human-friendly.

That said I like a walk on the beach – so long as it’s quiet and cool. I don’t like crowded places and I don’t deal with the heat well.

4. You’ve just been kidnapped and the people from the last TV Show/Movie you watched have to save you. Who is it?

Father Brown! I like quirky mystery books/shows. I’m in good hands with Father Brown – he always finds the truth.

5. If you could travel anywhere, where would you go and why?

On this planet – New Zealand, it’s beautiful. Off-world would be Mars – why not?

6. If you could bring one musician back from the dead, who would it be and why?

Mozart! I love his work and what he could have written had he not died so young can only be imagined. Modern muso? Freddy Mercury😊

7. If you could time travel, would you go to the past or the future?

If I could time travel – then both. The past – because I love history and to see and meet some of the people and events that shaped our world would be awesome.

Future – to see what humans have become and future tech.

8. Would you rather explore a new planet, or the deepest parts of the ocean? Why?

The ocean – have you seen the weird and amazing creatures. Although that would probably depend on which planet.

I love fantasy – it’s so versatile. Anything can happen – magic, monsters, mysteries, myths and lore, gods, demons, mortals, immortals, good, bad, everything in between.

10. Have you ever considered collaborating with another writer? If Yes who, if no why not?

Yes, I have a collaborated story with my friend Diana L. Wicker. It’s an historical fantasy novella about the determination of a woman in war. It’s fun to write like that – but you do have to really know the other author’s style and get on well.

11. Do you think giving away books for free works and why?

I did a series of blog posts on this topic – interviewing authors and readers on their thoughts on this. My view – it can work but doesn’t always. You’d need more than one book – some authors keep the first book in the series free to promote the others. It can work for a short time – for an event. It does depend on what the author expects from the promotion; readers often download a book BECAUSE it is free, not because they want to read it. Many readers expect a free book to be of poor quality, and many authors think free work demeans the hard work an author puts in. Most readers don’t review, and so promoting one’s book as free to garner reviews is probably a waste of time.

At the end of the day it’s an author’s choice of whether to offer a book for free. It MIGHT work – it does for some. It might not. It might get some reviews, it might not. From a reader’s perspective they might read it… or not. It’s the same as other marketing strategies – it’s not guaranteed.

They run the story. I have ideas and the characters go where they want to go… I am just the conduit. Sometimes I have to get out the poking stick and prod them back on course.

Yep. I have recently started a new job as a Quality Coordinator for a training company. 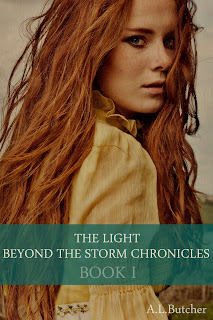 In a dark world where magic is illegal, and elves are enslaved a young elven sorceress runs for her life from the house of her evil Keeper. Pursued by his men and the corrupt Order of Witch-Hunters she must find sanctuary. As the slavers roll across the lands stealing elves from what remains of their ancestral home the Witch-Hunters turn a blind eye to the tragedy and a story of power, love and a terrible revenge unfolds.
BUY 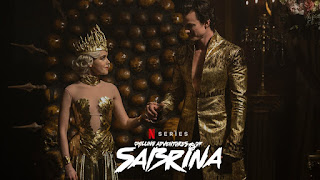 If you've been watching the series on Netflix, you remember how the last Season (Part 2) ended. Satan was trapped inside Nicholas Scratch, Lilith had carried him off to hell and Sabrina and her gang had agreed that they were going to find a way to get him back.

I imagined this to be the set up for the season, though the rescue was over pretty damn quickly and if I am honest, the remaining plot seemed to be a little bit all over the place with villains appearing from every side. 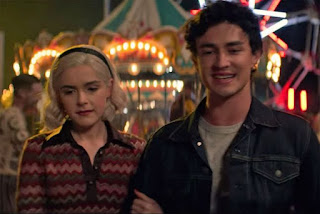 One running theme was the deterioration of Sabrina's relationship with Nicholas due to the trauma he suffered mentally being trapped with the dark lord inside his body and the physical torture that Lilith put him through. It isn't surprising that he would lash out at Sabrina, a) because it took her long time to rescue him b) she was being too understanding (which would annoy someone like him) and c) after what he sacrificed so that she didn't have to go to hell to be queen with her father, that she is trying to establish herself as monarch of hell. Though it was an inevitable thing, I felt sorry for Sabrina. 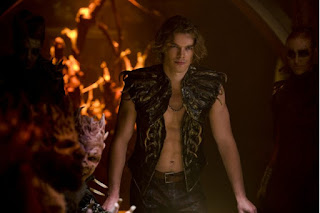 Season 3 introduces Caliban, a prince of hell, made from mud. I had high hopes for this character, as the challenge for the throne he set to Sabrina had the dynamic potential to been an electric semi seduction but he barely features at all. It was wasted in favour of exploring the pagan witches who'd come to town, the coven attempting to restore their dwindling powers and whatever was going on with Father Blackwood. Of course, there is nothing that says this character won't feature in the next series as season 3 ends with Sabrina without a love interest. 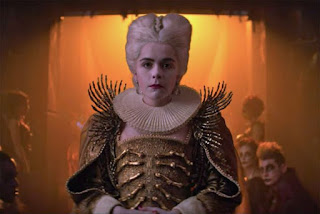 The season ends with a flirtation with time travel, and a new look for Sabrina, a very different queenly visage from the end of Season 2, and one I'm not keen on. I can honestly see the start of season four being a backlash where everything goes wrong from what Sabrina pulls at the end of the current season. I found because the story line seemed to be so here and there, it wasn't as gripping as I had found it before. Has this series already run out of steam?